A sports editor has praised the nation’s “damn good” regional football journalists after his newspaper made the final of a national awards ceremony.

Nick Westby has spoken up for sports reporters working in the industry after the Yorkshire Evening Post was nominated for the Newspaper of the Year title at the Football Supporters’ Association Awards for 2021.

The Leeds-based daily was the only regional title to be shortlisted in the category, with the Guardian winning a public vote ahead of an awards ceremony held on Monday.

The YEP was originally shortlisted for its coverage of Leeds United, and its appearance in the final came after the paper ran a special edition on Saturday, pictured below, marking 10 years since the death of former player Gary Speed. 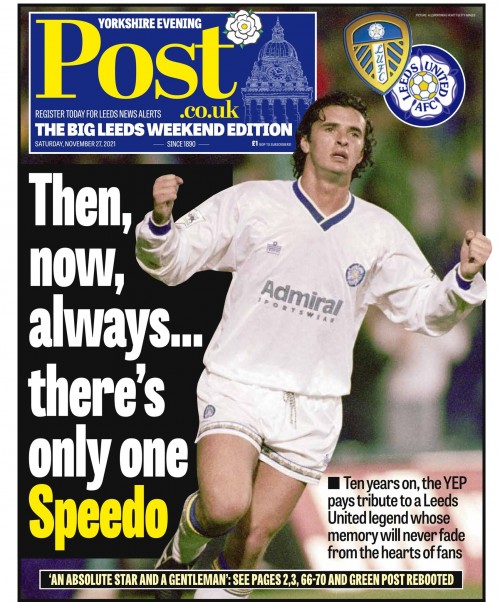 Speaking to HTFP, Nick said: “Congratulations to the Guardian for winning Newspaper of the Year, and to all the other shortlisted titles for making it that far.

“And thank you to the FSA for their continued support of the very many different platforms covering football.

“It was an honour for the Yorkshire Evening Post to be in that company and to be the only regional title to make it onto the list.

“There are a lot of damn good regional journalists covering football the length and breadth of the country, some without ever getting recognition like this, but that doesn’t detract from the job they are doing, which in this day and age with social media, print and digital demands, really is becoming an all-consuming 24/7 job.”

Nick went on to say a “huge thank you” to all the United fans who voted for the YEP and helped it to make the shortlist.

He added: “The validation from them that the coverage we provide on Leeds United and football in general is a real pat on the back and reaffirms our commitment to covering that club with fair, balanced, insightful and analytical content.

“The whole team at the YEP greeted this nomination with a huge sense of pride and we will use it as a springboard to strengthen our coverage and continue giving fans of Leeds United the honest service they deserve.”