A regional daily’s investigation has revealed the “shocking” extent of violence against women on its patch.

The Northern Echo splashed yesterday on its probe into the issue following the death of Sarah Everard in London.

The issue featured a piece from Jessie Joe Jacobs, Labour’s candidate for Tees Valley Mayor, who wrote exclusively for the Darlington-based daily about her personal experiences of domestic abuse.

The Echo’s coverage of violence against women has been led by reporter Tasmin Lockwood. 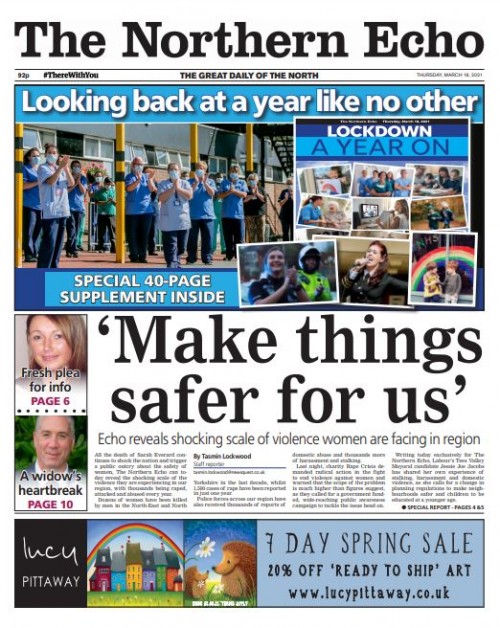 She told HTFP: “What has happened to Sarah Everard has made us all stop and think. Her death has stirred up awful memories for women across the country.

“A while back my flatmate and I sat in our living room chatting with friends when the conversation moved on to sexual assault. We all had stories to tell. It was that moment that I realised how commonplace attacks on women are.

“The fact that half the population – men – are shocked by the outpouring of experiences being shared by women in the aftermath of Sarah’s murder is, in itself, shocking.

“It’s our job as journalists to inform, educate and promote conversations and debate around tough issues and this is why we must do our best to continue shining a light on crimes against women and girls.

“By revealing the true extent of the situation, hopefully we can inspire change and spare future generations of women from similar experiences.”

Editor Karl Holbrook said: “Sometimes a tragedy is so shocking that it requires us all to stand up and be counted and as the product of a home torn apart by domestic abuse, I am determined The Northern Echo stands up and helps give voice to the changes that are so desperately needed in our society in the wake of the Sarah Everard tragedy.

“This week we have highlighted the experiences of women from across the North-East, including the harrowing experiences of Labour’s Jessie Joe Jacobs, who wrote exclusively for us about her personal experiences of domestic abuse.

“We’ve also laid bare the shocking scale of violence women in our communities face, including those whose lives have been ripped apart by sexual abuse, stalking, harassment and violence to those senselessly killed by their male abusers.

“I have got to be honest, it has shocked me. Like many men, have been too unaware of the extent of the problem. And I’m disappointed in myself for that fact, given I was raised largely by a single mother and a fierce grandmother, both who faced battles at the hands of abusive men.

“But my eyes have been opened wider and as a father, if nothing else, I have a responsibility to do what I can to help in some small way to facilitate change.

“Thanks to the fearless reporting of my team, and the courage of women to open up about their experiences, we have been able to put this defining topic front and centre in our news agenda and they can count on us to continue doing so.”