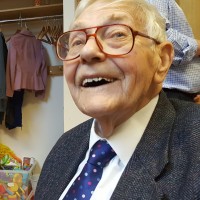 A journalist who served as a regional daily’s theatre critic for 38 years has died a day short of his 94th birthday.

Tributes have been paid to Emrys Bryson, who worked for the Nottingham Evening Post for 46 years.

Almost four decades of his service with the Post was spent as its theatre critic.

Emrys, pictured, was also known for his off-beat features and his weekly On Spec column.

Former Post writer David Lowe said: “He will be greatly missed. He was a wonderful colleague, an inspirational writer and a dear friend for well over 50 years.

“His influence extended well beyond Nottingham and he was well respected in the world of theatre, newspapers and broadcasting.”

Jeremy Lewis, who succeeded Emrys as theatre critic of the Post, said: “If you missed a show at the Playhouse or Theatre Royal, reading a Bryson review was the next best thing. In fact, sometimes it was better. The article was often more entertaining than the actual performance.

“Emrys was a wonderful writer on any subject but the depth of his knowledge and understanding of showbiz in general, and the theatre in particular, was perhaps unique in the regional press in the late 20th Century.

“As a reviewer he could be mischievous, but he was also kind. He gave praise where it was due, yet where a drubbing was required, he never resorted to making fun of individuals.

“As a colleague, he was helpful, considerate, inspirational and very, very funny.”

Born in Tipton, the son of a railwayman and the grandson of a miner, Emrys began his career on the Walsall Times aged 16 before moving to Nottingham in 1946, initially serving as a general reporter.

When Emrys retired from the Post in 1992, the Royal Centre presented him with a director’s chair and an auditorium was named after him at the Showcase Cinema.

He was married for 44 years to his journalist wife Marian, who he met in the 1950s after she moved from the Lincolnshire Echo to the Post, until she died from cancer in 2002.

Emrys, who died on 12 March, was father to Paul, Kate and Vic and grandfather to Lois, May and Bonnie.