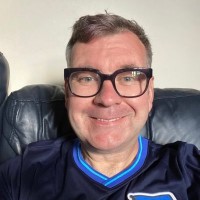 A regional daily’s former night editor is recovering from brain surgery after falling ill and collapsing in his kitchen.

Mark Charlton, formerly of the Leicester Mercury, underwent an operation after doctors discovered a colloid cyst on his brain.

Mark, pictured, had been feeling unwell for some time when he collapsed in the kitchen making his children’s packed lunches for school.

After seeing his GP he was taken to Leicester Royal Infirmary and later transferred to the neurology unit at Nottingham’s Queen’s Medical Centre on 12 July.

In a blog about his experience, Mark wrote: “I was told I had a colloid cyst on my brain which had grown so big it was blocking the flow of fluid away from my brain.

“As a result, fluid was backing up and putting pressure on my brain, affecting how I walked, my speech and giving me headaches.

“The neurologist told me the risks of the operation, part of a conversation that started by explaining that if I did nothing I wouldn’t be around much longer… All brain surgery carries risks, but I was so unwell I knew I had to take the treatment and hope for the best.

“There is so much I could say about weighing up the risks, but ultimately I knew I was in a bad way and the operation was the only way. I tried not to think about a negative outcome.

“I’m happily married with twin 12-year-old boys. I just felt I had to get well again and put my faith in the team at the QMC.”

Mark, who is associate director of public engagement at De Montfort University, underwent his operation on 14 July and was discharged just a week after being admitted.

He added: “I thought that was incredible. Since then I have been getting stronger every day. I’ve lost two stone in weight (which I see as a positive side effect).

“I’m walking well every day, but get tired very quickly. It will probably take six months to be fully back on my feet and where I was before all this started.

“There will be no boozy nights out for a while, no gym/running for months and I’ve had my driving licence suspended until January 2022. That’s OK, we are used to lockdown in Leicester.

“My wife, Sara, and my boys, George and Joseph, have been incredible throughout this. Friends and work colleagues have been great and given me so much encouragement. Some have made me coffee in their gardens, taken me down to Braunstone Gate for a chat or met in the park.

“This has been really good for me. Thanks too to the members of Hertha Berlin UK Fan Club for the constant updates and goodwill. My memory, especially my short term memory, which was at risk, appears to be working. I know I have a long way to go, but I’m starting from a good place.”