Thousands of people who lost their television signal for weeks following a transmitter fire could be refunded thanks to a regional daily.

The Northern Echo has fought to help those affected by the fire at the Bilsdale transmitter in North Yorkshire, which knocked out the signal in up to a million homes across the region nearly three weeks ago.

Many people still haven’t had their signal restored, but the BBC had originally declined to introduce a compensation scheme for those affected.

However, the corporation finally announced a change of heart exclusively in the Echo on Saturday – although it says internal rules mean only those who will be affected for more than a month will be eligible for a refund. 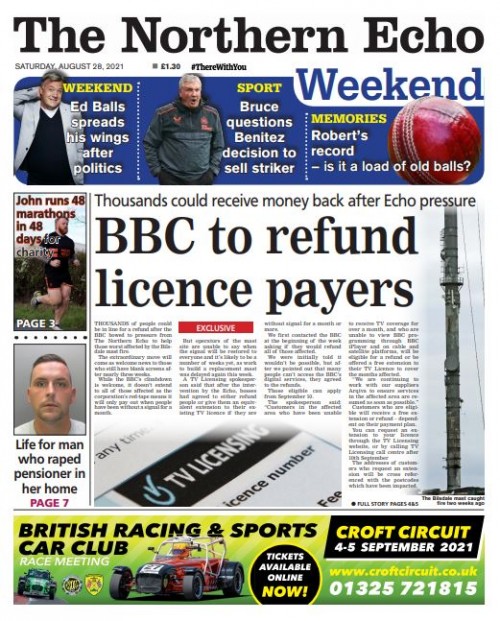 Echo editor Karl Holbrook, who has vowed to keep fighting on the issue, said: “I am absolutely delighted that the BBC has seen sense on this issue, which has affected tens of thousands of people across North Yorkshire and the North East, although we still don’t think it goes far enough.

“No consumer should be expected to pay for a service they don’t receive and many BBC licence payers have not been able to receive the service they have paid for.

“We were adamant that something should be done and I’m made up that our journalism has been able to make a genuine difference. It’s testament to the hard work and determination of our very own David Bourn and Connor Larman, in particular, who have battled away at this behind the scenes for days.

“It is proper journalism in action and another fine example of why local news matters. Now we will battle away to make sure this scheme is extended to everyone affected.”

“But when we pointed out that thousands of our readers, particularly the elderly, have no internet and the TV is their only window on the world, they agreed to pay refunds.

“It’s classically what we are all about, fighting for our readers. We promise we will keep monitoring things and won’t let the BBC off the hook.

“Nobody is blaming them for what has happened but why on earth should people have to pay for a service they can’t access?”

Operators Arqiva are still unable to say when the signal will be restored to everyone after work was delayed.

A TV Licensing spokesperson said: “Customers in the affected area who have been unable to receive TV coverage for over a month, and who are unable to view BBC programming through BBC iPlayer and on cable and satellite platforms, will be eligible for a refund or be offered a free extension to their TV Licence to cover the months affected.

“We are continuing to work with our suppliers Arqiva to ensure services in the affected area are resumed as soon as possible.”