A regional daily has urged its readers to “keep Boris Johnson honest” after launching a campaign aimed at getting politicians to fulfil their promises.

The Nothern Echo has launched the ‘Level Up North-East’ campaign in a bid to ensure promised investment in its patch comes to pass.

The Darlington-based daily has made the call ahead of local elections this coming Thursday as voters “elect a new raft of politicians to pursue this agenda”.

The campaign was launched on the Echo’s front page on Thursday, pictured below. 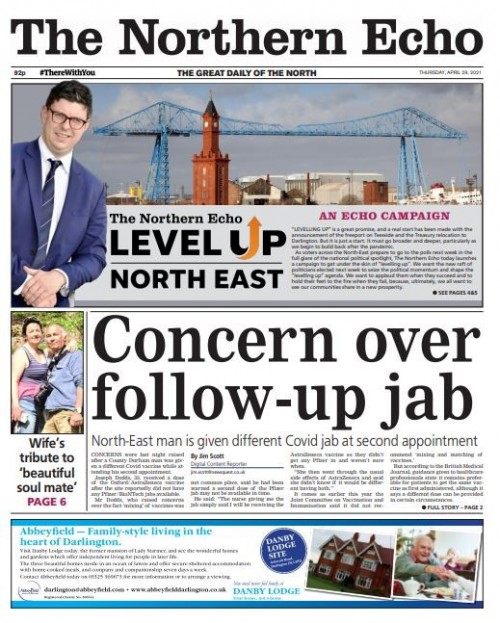 An accompanying editorial reads: “This demand for action and for change is all the more pressing because we know, thanks to this alignment of the political stars, because of the result of the December 2019 election, the region is in the spotlight in way that it hasn’t been since the early days of Tony Blair’s government in 1997.

“The politicians know it. It is as if they have rediscovered the region, blizzarding us with prime ministerial and party leader visits.

“Hartlepool is the most important by-election in 30 years; the Tees Valley mayoral contest is subject to much more attention than the battle in London, and even the county council elections in Durham will tell us so much about how people are buying in to this promise of ‘levelling up’.

“It is crucial that we, and our elected representatives, seize this moment while the stars are aligned in our favour.

“We cannot allow Whitehall to think that a few Budget announcements mean that the Tees Valley has got its dues; we have to keep Boris Johnson honest.

“He may have got Brexit done, but now we are going to ensure that after all the promises he lives up to levelling up.”