Daily ‘throws weight’ behind bid to merge seven councils into one

A regional daily has “thrown its weight” behind a campaign to merge seven local authorities into one in a page one comment.

The Northern Echo has backed a proposal for the creation of a single North Yorkshire “mega-council” over a rival plan which would see seven authorities divided into two.

The Echo’s backing for the campaign provided a splash for the Darlington-based daily on Wednesday, pictured below.

In a comment piece, the newspaper showed its support for the “great brand” of North Yorkshire ahead of the “momentous decision”. 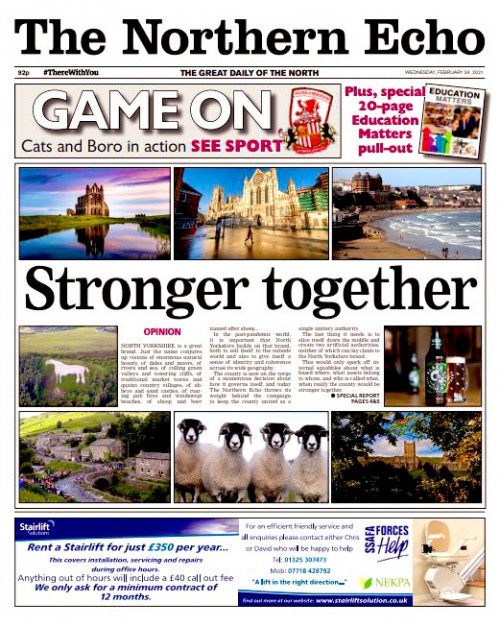 It added: “Today The Northern Echo throws its weight behind the campaign to keep the county united as a single unitary authority.

“The last thing it needs is to slice itself down the middle and create two artificial authorities, neither of which can lay claim to the North Yorkshire brand.

“This would only spark off internal squabbles about what is based where, what assets belong to whom, and who is called what, when really the county would be stronger together.”

The “mega-council” would cover 608,000 people and then join with York to elect a mayor.

The Echo said: “The second [proposal] would see the seven district councils split themselves on an east-west basis, break-up the existing county structure, drag in an unwilling York City and somehow fashion two unitary authorities, which would then unite to elect a mayor.”

“Their sense of identity lies with their local towns and with their great overarching brand of North Yorkshire, which means so much to them and to their visitors.

“To break that brand up, and to chop up the county-wide services, would be a self-inflicted wound and we would hope that the Government would see that North Yorkshire is stronger together as one.”