A regional daily used its front page to say farewell to a footballer whose powerful shooting earned him the nickname “Hotshot”.

The Yorkshire Evening Post splashed on Monday on the death of Peter Lorimer, formerly of Leeds United and Scotland.

Lorimer, who was 74, won two league titles, an FA Cup, a League Cup, a Charity Shield and two Inter-Cites Fairs Cups with United in the 1960s and 1970s.

His volleyed goal in the 1975 European Cup final should have won that trophy too but Leeds went on to lose 2-0 to Bayern Munich after some controversial refereeing decisions that are remembered in West Yorkshire to this day. 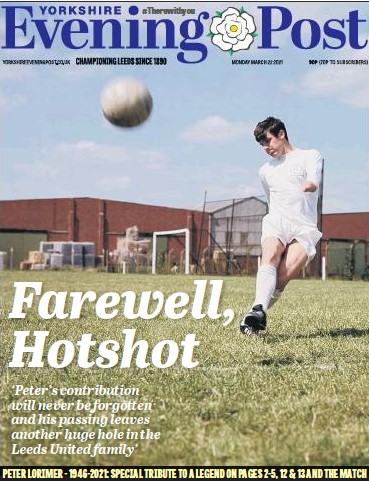 In addition to Monday’s front page pictured above, the YEP also featured several pages of tributes to him inside.

In an obituary, chief football writer Graham Smyth wrote: “Lorimer’s nicknames said it all about his reputation and ability as a goalscorer. Whites fans called him ‘Lash’ and ‘Hotshot’ because he could, to put it mildly, strike a ball very well indeed.

“Legend has it he broke a goalkeeper’s fingers with a 20-yard free-kick as a schoolboy, playing for Stobswell against Linlathen at Caird Park.

“As the 1972/73 Barratt football card noted: ‘Peter had one of the hardest shots in football and scores ‘impossible’ goals.’ And the thunderous shots that left Lorimer’s boot brought he and Leeds United glory.”