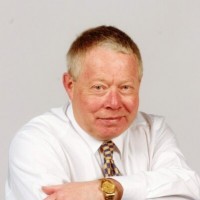 A news editor who served a regional daily in two separate spells has died aged 70.

Tributes have been paid to Bert Ovenstone, who ran the newsdesk at Aberdeen daily the Press & Journal.

Bert, pictured, served as night news editor at the P&J until his retirement five years ago.

He was diagnosed with Motor Neurone Disease last year and died earlier this month.

Rebecca Buchan, who heads up the City and Aberdeenshire news team at the P&J, told the newspaper: “Bert was a wonderfully talented and patient news editor who spent many an evening helping me improve my copy.

“The wisdom and kindness he showed me, and all other trainees who were keen to learn, was invaluable.

“I can honestly say I would not be the journalist I am today without his teachings.”

Bert began his career with the Fife Herald as a trainee reporter straight from school, moving to Aberdeen as a senior in the 1970s.

At the P&J he also served as an official within the National Union of Journalists chapel at Aberdeen Journals Ltd, but left in January 1988 Bert to join Grampian TV’s newsdesk.

Bert also spent a brief time in public relations for Grampian, and with STV, before returning to the P&J as night news editor.

Bert met his wife, Susan, in the Aberdeen newsroom and the couple went on to have three sons before later divorcing – Paul, Nicol, who sadly died in infancy, and Ross.

Ross and Paul had looked after their father in his home for as long as they could after his diagnosis.

Bert was more recently a resident at Wyvis House care home, Dingwall, where he died on 10 November. A celebration of his life was held on Tuesday.

Ross told the P&J: “We were very lucky children.

“Dad provided us with a safe home, good schooling, lots of fun and opportunities to try many new things, activities, visits to interesting places and foreign holidays.”

Paul added: “We have received many messages from journalists recalling support and guidance Dad gave them.

“His job was very important to him and he firmly believed it was an honour to accurately inform people about current news and affairs.”