A regional daily has used its front page to call for an end to the coronavirus “pingdemic” – warning it is threatening to bring businesses “to their knees”.

The Derby Telegraph has called for urgent reform to the ‘Test and Trace’ system due to thousands of people across Derbyshire being urged to self-isolate after being “pinged” by the NHS Covid-19 app.

The Telegraph’s call comes after Prime Minister Boris Johnson and Chancellor Rishi Sunak controversially revealed on Sunday morning they would not be self-isolating after being ‘pinged’ by the app.

They reversed their decision just over two hours later after public pressure. 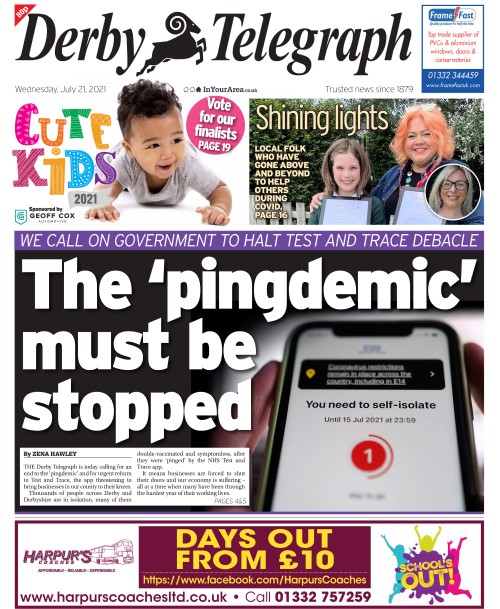 The Telegraph splashed on its campaign yesterday, pictured above.

In an accompanying comment piece, agenda editor Zena Hawley wrote: “The Derby Telegraph is today calling for an end to the ‘pingdemic’ and for urgent reform to Test and Trace, the app threatening to bring businesses in our county to their knees.

“Thousands of people across Derby and Derbyshire are in isolation, many of them double-vaccinated and symptomless, after they were ‘pinged’ by the NHS Test and Trace app.

“It means businesses are forced to shut their doors and our economy is suffering – all at a time when many have been through the hardest year of their working lives.”

The editorial went on to quote Craig Bunting, co-founder of coffee shop chain Bear, which was forced to close two branches in Derby on Saturday after staff members were told to isolate by the NHS Covid-19 app.

Zena wrote: “Now, along with many other companies and businesses, including Derbyshire Live and the Derby Telegraph, he has called for called for the implementation of a test and release system, allowing those who test negative to avoid isolation, providing they re-test regularly.

“There are also calls for funding to be made available to small businesses which are struggling because staff are self-isolating.

“In what has been described as a ‘pingdemic’, thousands of workers in pubs, shops, offices and factories across Derbyshire have joined hundreds of thousands more nationally, who have been told to stay at home after being deemed to have been in close contact with someone who has tested positive for Covid.”