A regional daily is fighting to unite its patch against hate crimes following a spate of attacks on gay people.

The Birmingham Mail has launched a new campaign called ‘Hands Not Hate’ after covering a series of assaults on LGBT+ people over the past two months.

As part of the campaign, the Mail has vowed to call out homophobia and share the stories of gay people across its patch who “may have once been afraid to show their true selves, and who may now be afraid full stop”.

It is also encouraging readers to post a message of support on social media for Birmingham’s LGBT+ community using the hashtag #HandsNotHate. 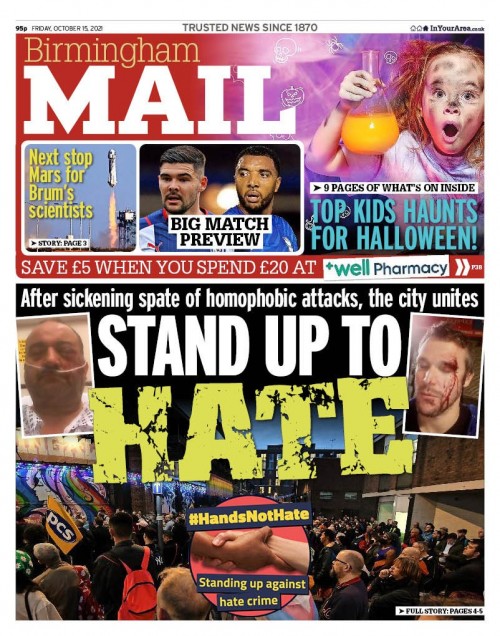 The Mail splashed on the campaign’s launch on Friday, pictured above.

Mail editor Graeme Brown, who also edits its Birmingham Live sister website, said: “There has been a rising tide of vile crimes carried out against people not because of what they’ve said or done but because of who they are – and we couldn’t keep reporting on it without standing up against it.

“We are pleased to see the police and city council stepping up their efforts – and we are sure there is more that can be done. But Birmingham also has a duty to stand up and say no.

“The extremists cannot be allowed to drown out the views of people in this city – known around the world as a hive of inclusion – it’s time to have our voice heard.

“And Birmingham Live is saying loudly and clearly this is shameful and unacceptable.”

John-Paul Kesseler was walking hand-in-hand with another man last Sunday when he was hit on the head with a wine bottle by an assailant who shouted “you should not be doing that” at him.

Mr Kesseler told the Mail: “Holding hands is just a natural thing which people do without thinking.

“Most people don’t have to worry about holding hands in public – but we now do – which is shocking.

“This campaign is a wonderful initiative, highlighting the issue of homophobia and doing something about it.”