Daily launches bid to get lockdown laptops for disadvantaged kids

A second regional daily has launched a bid to get laptops for disadvantaged children being forced to learn from home during lockdown.

Newcastle daily The Chronicle’s Laptops for Kids scheme comes after new analysis revealed there are at least 55,000 families in the North-East of England without access to a laptop, tablet or desktop computer.

The campaign is calling on individuals as well as businesses and organisations throughout the region to donate computers.

A similar scheme is also being run by Sheffield daily The Star. 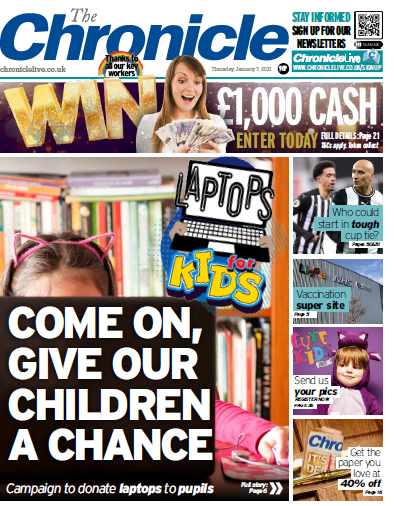 The Chronicle’s campaign was launched on its front page yesterday, pictured above.

Chronicle news editor Will Metcalfe told HTFP: “After speaking to teachers in the city about the effect another lockdown could have on some of our most vulnerable children it became clear that we had to try to help.

“At one school I was told hundreds of children lacked any access to the internet. These children are at risk of falling behind through no fault of their own. It’s 2020 and the longer the crisis continues, the more they suffer.

“I wanted to donate an old machine of my own but had no luck finding a scheme, which is when I was contacted by the Northern Powerhouse Partnership which led to this campaign. I just hope we can help put as many children as possible to learn in lockdown.”

Helen Dalby, Reach’s audience and content director in the North East, added: “This campaign could make a huge difference to so many children who have no access to digital devices to help them learn in these challenging circumstances.

“Councils are doing a brilliant job of coordinating as many new laptops as they can – but with the sudden change in plans for the new term at the eleventh hour, it is difficult to get the numbers required to the children who need them most.

“We felt we had a role to play in helping to raise awareness of the problem, but also to bring together the many businesses that want to provide support with partners who could facilitate the practicalities quickly.”

The campaign is being run in conjunction with Northumbrian Water, the Northern Powerhouse Partnership and Sunderland-based IT firms Rebuyer and Code.

Sarah Mulholland, head of policy at the Northern Powerhouse Partnership, said: “Many schools across the North were disproportionately affected by school closures pre-Christmas, meaning children here – particularly those from disadvantaged backgrounds – have an even bigger hill to climb when it comes to catch-up.

“The digital divide is far from a new problem. Last March, we called for urgent action from the Department of Education to address the situation.

“Whilst the government has now managed to buy a half a million laptops, there are still many children who need to be given a place in school as they can’t learn from home because they don’t have a device or a quiet space to work.

“We’re now in a race against the clock to provide the necessary technology to all children. Too many pupils, who have already missed the best part of a year of school, are at risk of falling even further behind simply because they don’t have access to a device.”