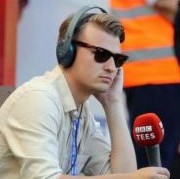 A regional daily is launching a new series of “safe spaces” online for football fans to talk about their clubs free from abuse.

The Northern Echo has started rolling out the Facebook groups, which it is calling ‘Echo Chambers’, for supporters of the clubs it covers.

The Darlington-based Echo has so far launched groups for fans of Middlesbrough and Sunderland.

Further pages will be targeted at supporters of Darlington, Hartlepool United and Newcastle United.

Echo digital sport journalist Matty Jones, pictured, told HTFP: “The idea is to provide a safe space for fans to engage with each other with stories, memories, tales of their teams and what they love most about their club whilst keeping up to date with the Northern Echo’s coverage of their football team.

“I absolutely love football nostalgia and I’ve already loved diving into the treasure trove that is the Northern Echo’s archives. There are some fascinating memories that will hark fans back to a day and age of their club.

“It’s going to be run by myself and fellow writer Scott Wilson, whose reputation as one of the leading journalists in the North-East goes without saying, so it’s safe to say we’ve got you covered.

“I understand it’s quite a bold move and it’s a unique way to broaden our outreach to new audiences. However, as much as sport is news, it can also be enjoyable and we wanted to create a space for that. It goes without saying any abusers will be thrown out of the group.”

Matt added “hundreds” of Middlesbrough fans had so far joined their ‘Echo Chamber’.

“We’re going to be launching further pages for our Newcastle United, Hartlepool and Darlington fans so we can’t wait for them to get involved too.”