A regional daily has launched a £5m bid to build a centre to help treat people suffering from Motor Neurone Disease.

The Yorkshire Evening Post is campaigning to create the Rob Burrow Centre for Motor Neurone Disease, named in honour of the former Leeds Rhinos rugby league player who has the condition.

The YEP has teamed up with Leeds Hospitals Charity to launch the campaign to build the facility, which would also be used for research into the condition and possible cures.

More than £1m towards the appeal has already been raised by Mr Burrow’s former teammate Kevin Sinfield, who the Leeds-based daily has called to be knighted for his charity work. 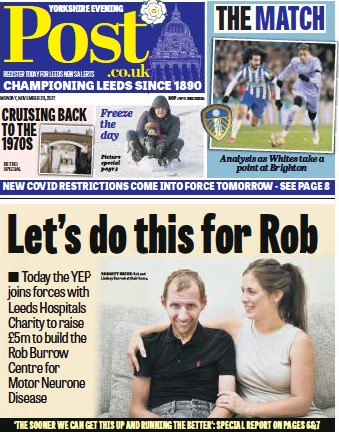 The campaign’s launch provided a splash for the YEP yesterday, pictured above.

In an accompanying comment piece, editor Laura Collins wrote: “Let’s do this for Rob Burrow – and the thousands of people who are suffering from Motor Neurone Disease.

“That is the rallying cry on our front page today as the Yorkshire Evening Post throws its support behind the mammoth fundraising effort to open a brand new centre in Leeds dedicated to the treatment of MND.”

She added: “Rob’s wife Lindsey is hoping that her beloved husband can open the new centre himself, so time is of the essence.