A regional daily journalist has uncovered a “culture of denial, obfuscation and secrecy” inside England’s second largest police force.

A six-month investigation by Manchester Evening News politics and investigations editor Jen Williams has found “a tendency towards obfuscation, denial, secrecy and an instinct to defend the indefensible” at Greater Manchester Police.

Examples of this include misleading and inaccurate statements, denial of official criticism and legal stonewalling.

The MEN had also reported police officers were left fearful to report failure, while those attempting external scrutiny were brushed off by the force. 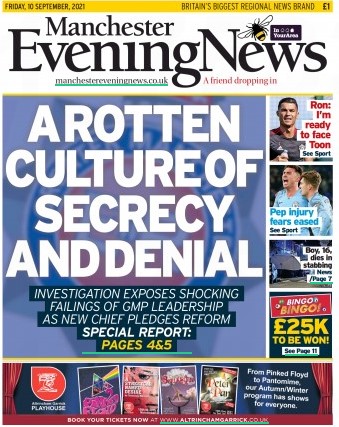 The MEN splashed on the investigation on Friday

MEN editor-in-chief Darren Thwaites told HTFP: “The institutional failings of Greater Manchester Police over many years are laid bare in this investigation.

“This story uncovers the risks inherent when organisations put their reputation management ahead of serving the public interest and it poses serious questions over the effectiveness of police scrutiny.

“The secrecy, denials and obfuscation expose a rotten culture that ill-served the many hard-working frontline officers already dealing with the challenges imposed by government cuts.

“We now have a new chief constable in place who has been refreshingly forthright in setting his standards and we’ll be outlining what the future holds in a second part.

“This has shown again the importance of a vibrant regional media able to provide independent scrutiny and oversight in the public interest.”

HTFP reported last year how Jen had hit out at GMP Chief Superintendent Phil Davies after he refused to answer the MEN’s questions on the grounds that its journalists “write what they want anyway.”

The first part of her investigation was published online on Thursday night, while part two will be run this week.

Posting on Twitter, Jen described the investigation as “probably the most difficult thing I’ve ever tried to write about”.

She added: “There are now major plans underway to improve GMP’s performance and culture.

“Obviously the proof will be in the delivery, but next week part two will look forward not backwards – at those plans, both operationally and politically.

Finally, and this is going to sound a bit chippy, but I’m going to say it anyway. Local press matters.

“And reports of our death may have been exaggerated.”