Regional dailies will join the nation’s leading sports clubs and governing bodies in a three-day social media boycott to protest against racism.

The Northern Echo and Eastern Daily Press have announced they will abstain from posting content via their sporting channels on Facebook and Twitter between 3pm today and 11.59pm on Monday.

The boycott was called by English football’s largest governing bodies and organisations, including the Football Association, Premier League and EFL, last weekend to highlight the issue of racist abuse being published on the platforms.

Since then, cricket and rugby union teams and governing bodies have joined the blackout in solidarity, along with sponsors and media companies including BT Sport and talkSPORT. 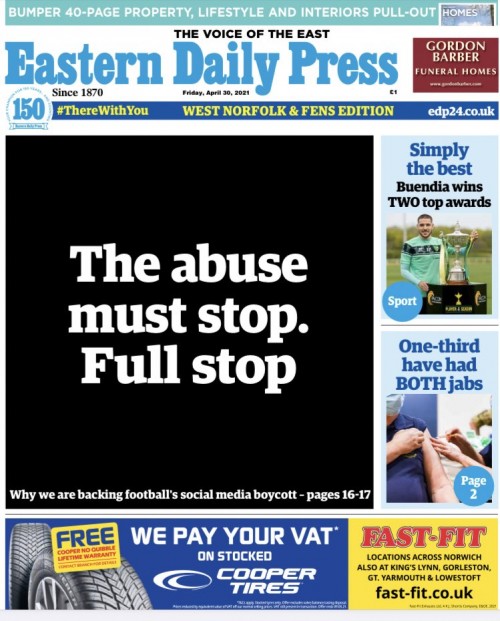 The EDP splashed on the boycott today, pictured above.

Editor David Powles said: “Any form of abuse is unacceptable, but we have seen in recent years a massive increase in nasty and highly upsetting behaviour from some on social media. This needs to stop.

“A lot of this abuse is directed towards footballers, but they are not alone in being the victims. It can affect anyone, from almost any background, and we hope that by joining this campaign it will show a united front in making it clear that no abuse is acceptable. Full stop.

“We are happy to lend our support to this social media boycott in the hope that it makes everyone stop and think about their own actions, changing them if need be.

“But we are also urging the social media companies to look at what they can do to bring in better and more stringent guidelines and protocols.”

Echo chief sports writer Scott Wilson, pictured, explained the move in an editorial for the Darlington-based daily this afternoon.

He wrote: “Sadly, it is unlikely to force the leading social media companies into the kind of fundamental reform that is badly required. It nudges the debate forward though, and that in itself is important.

“It highlights the way in which the likes of Twitter, Facebook and Instagram do not adequately police their own platforms, preferring instead to grant abusers a cloak of anonymity that means it is impossible to trace and prosecute them.

“It flags up the social media sites’ failure to get serious when it comes to tackling serial abusers.

“And it helps expose the glaring differences between what a print newspaper like the Northern Echo is able to legally publish and what social media sites can carry and disseminate without any threat of being restrained by the law.”

Scott went on to accept there would “be a cost to such action”.

He added: “This is a big weekend of football. On Saturday, Sunderland can guarantee their place in the play-offs. On Sunday, Newcastle could beat Arsenal. On Monday, I will be at Wembley covering the all-Northern League FA Vase final between Consett and Hebburn.

“We will still be providing our extensive weekend coverage on the Northern Echo’s website, but with our social media channels silent, we will be unable to direct our online readers to the breaking news as we normally would. Unquestionably, though, we feel that is a price worth paying.

“As the Great Daily of the North, a newspaper with a proud history of campaigning against intolerance and injustice, The Northern Echo will not stand by as others attempt to carry the fight.

“We have argued for much greater control of social media for years, highlighting case after case where the failure of social media companies to adequately police their own platforms has blighted and tragically sometimes ended lives.

“This is an important fight, and we are proud to be part of it. As the sporting world is about to unequivocally state, enough is enough. By saying nothing this weekend, the Northern Echo hopes to once again ensure that its voice is heard.”