Daily hails Budget as Sunak delivers on four of its campaigns

A regional daily has hailed Chancellor Rishi Sunak’s Budget after it delivered on four key issues on which it has campaigned.

The Northern Echo says its patch has been “reborn as a powerhouse” after Mr Sunak pledged to relocate Treasury jobs to Darlington and create a new freeport on Teesside.

However, other regional dailies splashed on disappointment for their areas this morning after they missed out on getting freeport status in yesterday’s announcement.

On its front page this morning, the Darlington-based Echo also praised the decision to continue the £20 Universal Credit uplift and the furlough scheme until September. 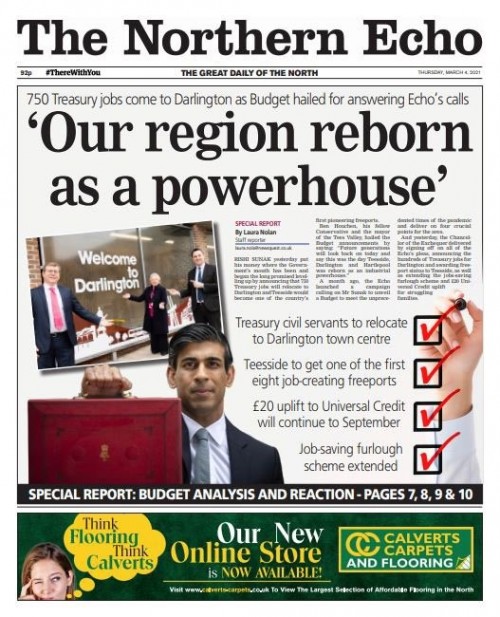 The Grimsby Telegraph was also among the other dailies to splash on its joy at the creation of eight new freeports after Humberside was chosen as the site of one of the “secure customs zones”. 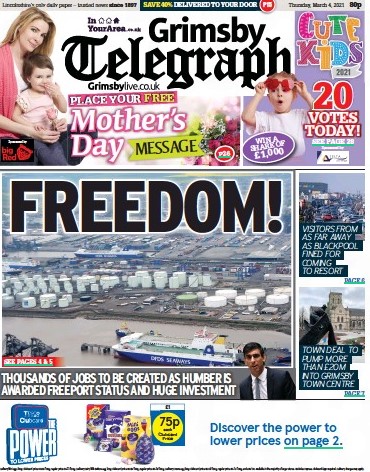 But both the Bristol Post and Newcastle daily The Chronicle used their front pages to show their disappointment at their patches missing out on the status. 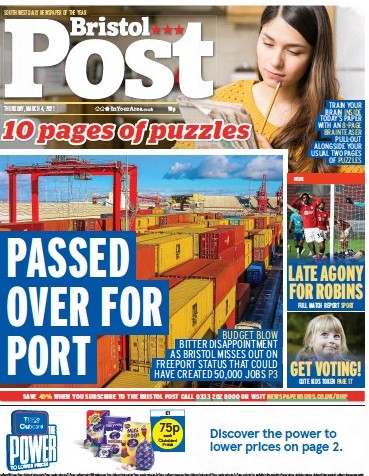 The National Union of Journalists has also welcomed Mr Sunak’s decision to extend the furlough scheme, but has warned many of its freelance members are still ineligible for financial support despite measure introduced by the Government during the coronavirus crisis. 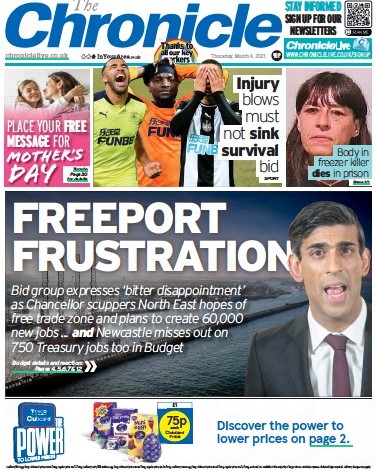 Michelle Stanistreet, NUJ general secretary, said: “We welcome the extension to the furlough scheme which has been essential in protecting media jobs hit hard by the effects of the pandemic – the job retention scheme must stay in place as long as is necessary to allow the industry to get back on its feet once the Covid-19 restrictions are lifted.

“But the real problem is that the media industry was in crisis well before being hit by coronavirus.

“The power of the tech giants has destroyed the news business model and that is why we have called for a levy based on their huge profits, which have increased vastly during the pandemic, to fund public interest journalism.

“That is why the union’s news recovery plan proposes a raft of measures and interventions to reboot a plural, diverse and vibrant news ecosystem and we will continue to discuss these plans with the governments of the UK and Ireland.”