Daily editor bows out after 36 years in the industry 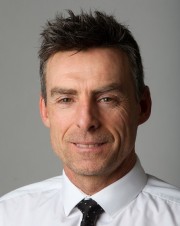 A long-serving regional daily editor is bowing our after 36 years in the industry with his titles to be overseen by a newly-appointed regional group editor.

Further moves see promotions for audience and content editors Vicky Nash and Katie Clark who will effectively deputise for Diarmuid in Dorset and Hampshire respectively.

Gordon, pictured, became Southern Daily Echo editor in 2017 following the departure of Ian Murray who went on to run the Society of Editors until earlier this year, later adding the Bournemouth title to his portfolio.

He said: “Gordon said: “After 36 years in the regional press it is time to look forward and enjoy retirement.

“It has been a privilege to have been the editor of both the Daily Echo Bournemouth and the Southern Daily Echo and I am certain that under the new team they will continue to go from strength to strength in the future.”

Added Diarmuid: “I am delighted to be appointed in this new role as regional group editor. Our titles in Bournemouth and Southampton are among the best in the country with enormous audiences that are the envy of the industry and I can’t wait to get started.”

Katie, regional digital audience and content editor, will become acting editor for the Southern Daily Echo on a six month secondment and will report into Diarmuid.

Vicky, audience and content editor in Dorset, will support Diarmuid as deputy group editor for the Dorset titles.

Newsquest editorial director Toby Granville said: “I’d like to thank Gordon who has steered the ship superbly through very challenging times and certainly deserves his forthcoming well-earned retirement spent on a beach in Bournemouth!

“I’m thrilled that Diarmuid — who has done an incredible job transforming the Dorset Echo into a digital powerhouse — has now been given this wider brief to take these titles to the next level.”

“With more than a staggering 15m page views a month the three Dorset and Hampshire daily titles offer unparalleled penetration of the market. This investment in a cocktail of new talent will drive this number skyward over the next few months.”