A regional daily has urged the Government to “put its money where its mouth is” – echoing a rival title’s plea to bring hundreds of jobs to its patch.

The Northern Echo has launched a front page plea for Chancellor Rishi Sunak to move 750 Treasury jobs to Teesside and called for further economic measures to help its readers.

The Darlington-based Echo has also called on Mr Sunak to extend support schemes currently protecting the economy of the North-East of England, especially the furlough programme.

The Newsquest daily also wants the £20-a-week uplift to Universal Credit, which is due to end on 31 March, to be extended, and has called for investment in transport infrastructure. 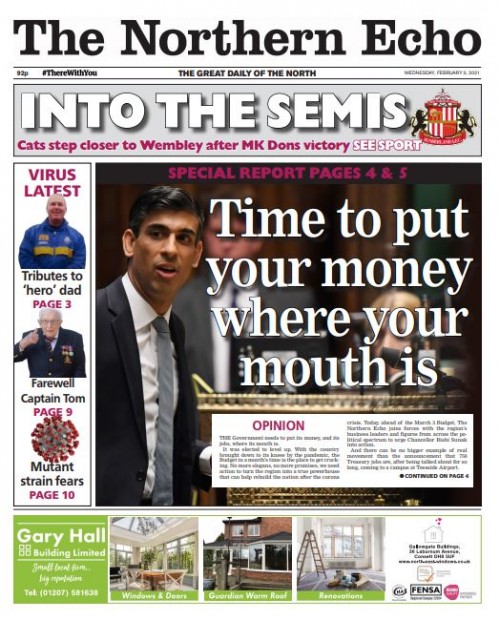 The Echo splashed on the campaign’s launch on Wednesday

HTFP reported last week how Reach plc daily the Teesside Gazette had issued its own front page appeal to Mr Sunak on the subject of the Treasury jobs, with the Government saying in response that their location will be “announced in due course”.

An Echo editorial launching the campaign reads: “We know Mr Sunak will have so many competing demands and, with borrowing set to reach £400bn in 2020-21 which would be the highest figure ever outside wartime, faces many difficult choices.

“But he must also know that the time for words and promises has now passed.

“And we need action so that the region can become a power-boost for the recovering economy; we need the Government to put money where its mouth has been for so long.”

A HM Treasury spokesman told HTFP: “We’ve invested more than £280bn throughout the pandemic to protect millions of jobs and businesses – and extended our self-employed and furlough schemes through to April so that people have certainty that help is in place.

“At the upcoming Budget the Government will set out how we’ll ensure public services continue to receive the investment they need.

“We’ll also outline the next stages of our plan for jobs to support businesses and families across the UK.

“That has been our priority throughout the past year and it will be the priority for the year to come.”