A regional daily has launched a front page plea to bring hundreds of Government jobs to its patch.

The Teesside Gazette and its Teesside Live sister website have called on Chancellor Rishi Sunak to commit to bringing its northern economic Treasury campus to Teesside.

The creation of the campus was announced last year as part of the Government’s “levelling up” agenda to boost investment outside London and the South-East, and Mr Sunak is expected to reveal its location in the near future.

Splashing on its call in Friday’s edition, pictured below, the Gazette said Teesside had “long been a front-runner” to be the location of the campus. 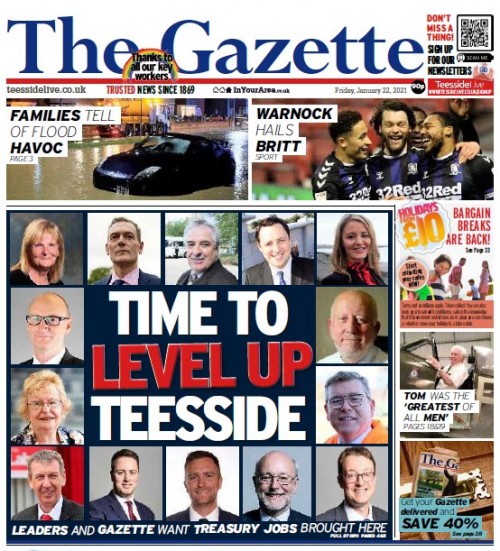 It also published cross-party statements of support from every council leader, MP, mayor and mayoral candidate on its patch.

In an editorial, Teesside Live editor Ian McNeal said: “For too long, decisions about our country’s future have been dominated by those based in London and the South-East. The Government has touted the creation of a northern campus as a key measure in addressing this long-standing problem.

“Having senior officials based in our area would provide a crucial influence on decisions over industry, transport and the environment.

“We agree with those behind Teesside’s bid that simply moving from London to another major city such as Leeds or Manchester would fail to meet the Government’s levelling up promise.

“Large numbers of Teessiders lent their votes to the Conservative Party in last year’s election – many for the first time. It delivered the party ‘red wall’ seats such as Redcar, Sedgefield and Bishop Auckland.

“Failure to make good on the pledges made to voters in those areas to bring about real changes would not be forgotten quickly.”

A HM Treasury spokesman told HTFP: “It is absolutely right that decision makers should be close to the people they serve and that’s why we are setting up an economic decision-making campus in the North of England.

“This will help deliver our ambition to level up opportunities, jobs and investment across the country and transform diversity of thought in the Civil Service.

“Next steps and the location will be announced in due course.”