A regional daily has called for a “Hillsborough-style” inquest into the deaths of hundreds of people at a hospital on its patch.

Portsmouth daily the News has demanded a coroner investigates the deaths of 456 people who had their lives shortened by the use of opioids at Gosport War Memorial Hospital between 1987 and 2001.

The News was praised by an independent review panel in June 2018 for playing a “prominent part” in making public concerns raised by families of people who died at the hospital.

When families affected by the Hillsborough disaster secured inquests, it opened the door for the Crown Prosecution Service to launch criminal proceedings – and the Gosport families now hope to achieve the same result. 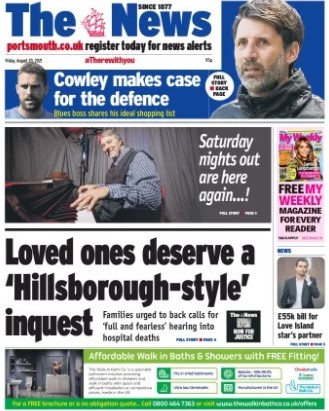 The News backed the call on its front page on Friday, pictured above.

The newspaper first began publishing concerns about the hospital in 2001, and the issue was also covered by the Southern Daily Echo.

Editor Mark Waldron told HTFP: “The News has been leading the campaign for justice for those who lost loved ones at Gosport War Memorial Hospital since we first covered the investigation into suspicious deaths in April 2001.

“We continue to fight on behalf of the families and believe that, after years of investigations and inquiries which have got us nowhere, a Hillsborough-style inquest will finally get the answers we have been seeking across three decades.”