A regional daily has called on a football manager to “do the honourable thing” and resign from his role.

Newcastle daily The Chronicle has urged Steve Bruce to quit Newcastle United after a series of poor results left the club threatened with relegation from the Premier League.

United lost 3-0 to fellow relegation rivals Brighton & Hove Albion on Saturday, prompting front and back page coverage of the crisis by The Chronicle yesterday.

Chronicle football columnist John Gibson described the result against Albion as the “final humiliation of a mighty club stripped of its dignity”. 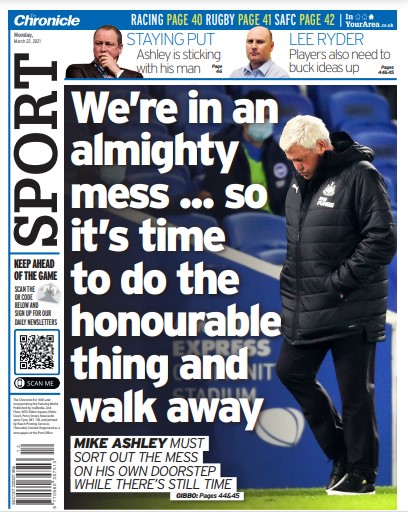 In a column, he wrote: “For gawd’s sake Steve Bruce man up and get out.

“Prove you care about what is best for this club as you repeatedly tell us you do and walk away. Don’t hang about waiting for the sack and a pay off.

“You have already admitted what you have done for the last few months is far from good enough and the damning evidence is there for all to see: in 18 of your last 20 matches you have failed to oversee a win.

“You are condemned out of your own mouth. So take responsibility and do the honourable thing.”