A regional daily has declared a 10-0 victory for ‘Love’ over ‘Hate’ on its front page after its editor hit out at “mindless bigots”.

The Manchester Evening News has paid tribute to England footballer Marcus Rashford after a mural on its patch was defaced with racist graffiti.

Racist vandals attacked the mural after England’s defeat against Italy in Sunday’s Euro 2020 final, in which Mr Rashford was among the England players to miss in the decisive penalty shoot-out.

But others later came forward to leave notes of support, England flags and floral tributes to the Manchester United forward at the site in response. 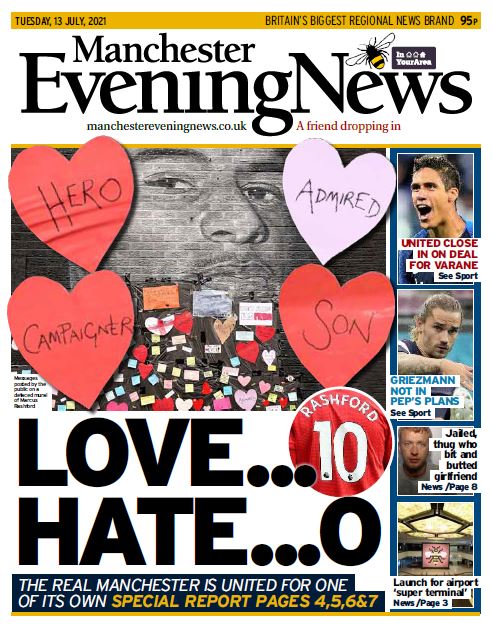 Referencing Mr Rashford’s United squad number, the actions prompted the MEN to declare a scoreline of ‘Love… 10 Hate… 0′ on its front page this morning, pictured above.

Editor-in-chief Darren Thwaites told HTFP: “We wanted to reflect the true reaction of the people of Manchester and to show that love will always overcome hate in this city.

“Marcus is one of our own and we’re so proud of what he’s achieved already at just 23. He’s an inspiration for everyone, a truly decent, humble person with an incredible talent that now transcends the football field.

“We all throw our arms around him and we know he’ll come back stronger than ever.

“If you only focus on the actions of a few mindless bigots, it can be easy to forget that the vast majority of people in this country are kind and decent.

“Gareth Southgate and his England football team represent the best of that.”

MEN features editor Chris Osuh has also penned an editorial thanking England’s players for “bringing together all colours of England, under one flag, one dream”.

Chris wrote: “These unifying moments that remind us of the best of us don’t usually happen on this scale.

“But they do happen, not just in millions of tiny, everyday interactions between families, friends, colleagues and strangers – but on those days when the whole country stops to take a breath.”

He added: “So thank you England, and well done, all of you. We know it’s only football, but it speaks of so much more.”