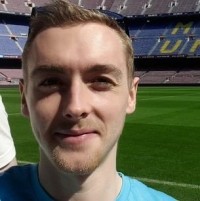 A journalist has been banned from participating in press conferences after being publicly attacked by a football club’s manager over a question he asked.

Swindon Town have told Swindon Advertiser sports reporter Jonny Leighfield he will only be allowed to observe the club’s press conferences and not ask questions after manager John Sheridan took offence to being quizzed about a spat between players during a recent game.

Mr Sheridan branded Jonny “pathetic” after being taken to task about the incident, which occurred at half-time during Town’s away game against Accrington Stanley on Saturday.

Jonny was informed of the club’s decision, which he was told was made by chairman Lee Power and chief executive Steve Anderson, after their following game against Oxford United on Tuesday.

According to the Advertiser, he was told a story the newspaper published online which contained an audio recording of the press conference incident had “annoyed those at boardroom level”.

Jonny, pictured, has since won support on Twitter from journalists including Henry Winter, chief football writer at The Times, and John Cross, who holds the same title at the Daily Mirror, as well as other industry figures and Town fans.

Speaking to HTFP, Jonny said: “I’m obviously disappointed first and foremost because you never want to be banned and not be able to do your job properly, but at the same time I almost feel proud because I’m asking the right questions.

“I’ve had a lot of support from Henry Winter and former Advertiser journalists, as well as some other big hitters in football, saying I’m doing the right thing.

“I’ve had a lot of people calling on the club to reverse the decision. People have heard the incident and they can make their own minds up.

“I’m kind of wearing it like a badge of honour because I feel I did the right thing.”

HTFP has previously reported on bans by the club affecting Advertiser journalists in both 2014 and 2015.

Jonny added: “Hopefully it’ll get resolved because it doesn’t look good on the club and there’s a considerable amount of fan presure for them to change their minds.

“I’m hoping I can keep doing my job as fairly and accurately as I did before.”