A regional daily has backed an MP’s bid to get “fairer justice” for people killed by a single punch.

The Northern Echo has lent its support to Dehenna Davison’s campaign to change the law on sentences for one punch assaults.

The Conservative MP for Bishop Auckland lost her father Dominic to such an assault at the age of 13, about which she has opened up in an exclusive piece for the Darlington-based Echo.

The campaign’s launch provided a splash for the Echo on Wednesday, pictured below. 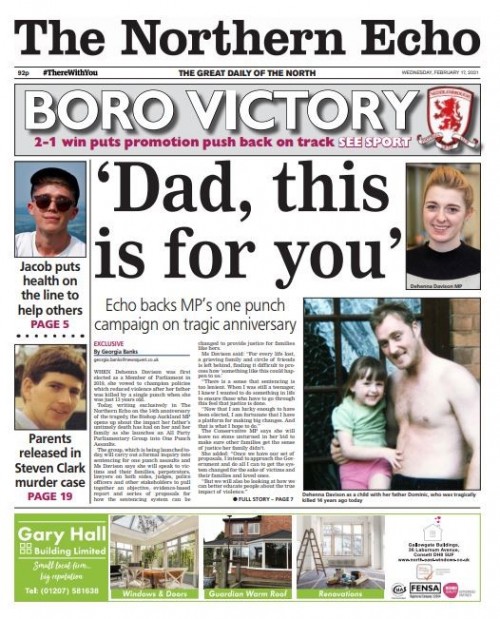 Mrs Davison wrote: “Now that I am lucky enough to have been elected, I am fortunate that I have a platform for making big changes. And that is what I hope to do.

“So today, in honour of my dad, I am launching the All Party Parliamentary Group for One Punch Assaults.

“The key role of the APPG will be to carry out a formal inquiry into sentencing around one punch assaults.

“It is my intention to speak to the victims of assaults and their families, perpetrators, lawyers of both sides, judges, police officers, and other stakeholders to pull together an objective, evidence-based report and series of proposals for how the sentencing system could be changed to provide a fairer sense of justice.”

Echo editor Karl Holbrook told HTFP: “We are so proud to feature this powerful and emotional campaign from Dehenna, and we’re honoured she came to us with it.

“This tragedy could have sent her life spiralling in a totally different direction, but instead it inspired her to claw her way into a position to make a change.

“I find that hugely inspiring. Her commitment to this important cause is so inspiring and we back her all the way.”

The Echo is currently recruiting reporters, and the positions are being advertised on HTFP here.