A regional daily is backing readers’ physical and mental health by promoting a series of 50 countryside walks for charity.

The Northern Echo has lent its support to a campaign called ‘The Big Smile’, which has been launched by a new charity called The Walk & Talk Trust.

The charity aims to raise £200,000 this year to buy walking boots for as many Year Six schoolchildren as possible across the North-East of England in a bid to improve the health of pupils across the region.

Every year, the charity will undertake a summer campaign of 50 fundraising 20km walks for adults in County Durham, North Yorkshire, Northumberland, the Tees Valley and Cumbria. 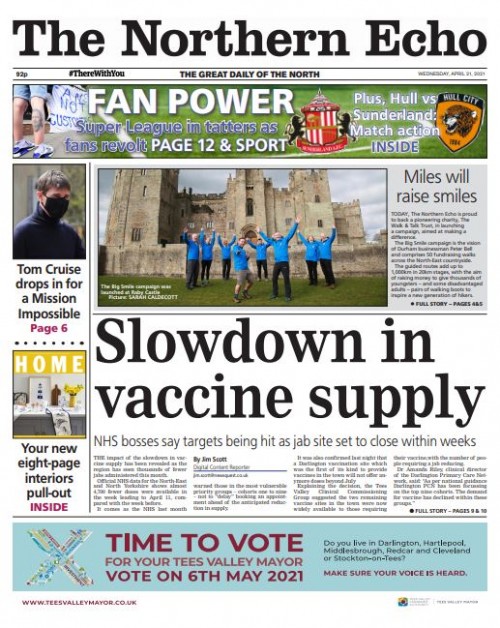 The Darlington-based Echo featured the campaign’s launch on its front page on Wednesday, pictured above.

Karl Holbrook, editor of the Echo, said: “We are proud to be media partners in such a fantastic initiative, and we look forward to following the campaign every step of the way with regular updates, pictures and video.”

The campaign is the brainchild of Peter Bell, former High Sheriff of County Durham.

He told the Echo: “We have a massive problem, in that 40pc of 10-year-olds are either overweight or obese due to poor diet and the fact that children’s physical exercise continues to dwindle.

“Our aim is to get kids to put down technology, put on their boots, and explore our glorious countryside.

“Walking and talking – whether it’s with family and friends or as a way of meeting new people – costs nothing and has massive benefits across all generations.”