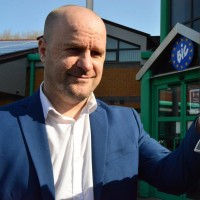 A regional daily has appointed an autistic guest editor to raise awareness of the condition.

Ashley Jones will step into the role with the Sunderland Echo today as the newspaper marks World Autism Week.

Father-of-three Ashley, pictured, is 36 and was diagnosed as autistic as an adult.

He works as a quality manager for the North East Autism Society’s Employment Futures department, which helps autistic and neurodiverse people find employment.

The Echo was involved in establishing the charity 41 years ago by supporting a group of local parents who campaigned to set up the country’s first school for autistic children.

Ashley said: “I am really grateful for the opportunity to be guest editor of a paper like the Sunderland Echo and to raise awareness of the importance of autism acceptance. It’s a huge honour and it makes me proud.

“I want to speak with my own words and be heard, delivering a positive message that the differences between us are not that great – and that those differences can be overcome with a bit of understanding.”

Wednesday’s edition will also feature an eight-page pullout of photographs taken by NEAS service-users and staff to showcase the vital work of the charity.

Echo editor Gary Oliver said: “We have very proud historic links with the North East Autism Society and we are delighted to be partnering this hugely important charity in such an innovative way during World Autism Week.

“It will be great to have Ashley’s insight as guest editor and we look forward to his special edition of the paper.”