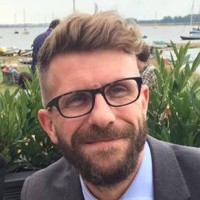 Sister dailies have united to demand their local MPs “prove their worth” for the region they serve.

The campaign aims to get more investment for the East Anglia as other regions of England, which have more devolved powers from Westminster, prepare to do so in a bid to rebuild after the coronavirus pandemic.

Announcing the launch of the campaign, Richard Porritt, pictured, who serves as business and politics editor at the Norwich-based EDP and Ipswich-based EADT, said the region had been “in the shadows” for too long.

In a piece for the EDP, he wrote: “We have quietly gone about our business and not moaned when government has repeatedly overlooked us.

“This newspaper has long argued this state of affairs cannot continue. And the pandemic that has ravaged our lives has quickened the need for a robust response. That is why today we are launching Fightback East.

“It is vital to get an ambitious manifesto together now. Even though the government is fighting daily fires recovery must be central to the thinking in Westminster.”

Richard went on to urge East Anglian MPs to back the campaign.

He said: It is our job to hold our elected representatives to account. And we will not be pulling any punches.

“It is time for the East’s MPs to prove their worth.

“It is time to step up and we will be reminding people of their part in this great effort come election time.”