A council’s deputy leader has left his role following a two-year investigation by a local newspaper editor.

Councillor Roger Hickford, who was second in command at Cambridgeshire County Council, tendered his resignation after a probe by John Elworthy into his acquisition of a house and a nine-acre farm tenancy from the authority’s own estate.

John’s investigation revealed that although Mr Hickford had declared his tenancy on the members register of interests, only a handful of colleagues were aware of it.

Mr Hickford resigned late last Friday evening ahead of an auditors’ report into the issue. 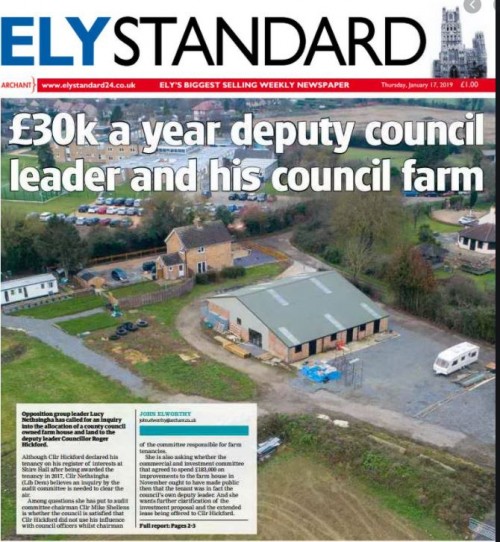 How the issue was first covered by the Ely Standard

John, who is editor of three Archant titles in Cambridgeshire including the Cambs Times, revealed much of the previously unexplained and unexplored background to the tenancy during his investigation.

His first story appeared as part of a 1,000-word exclusive in January 2019, and he followed this up with other stories challenging the decision to give Mr Hickford the tenancy.

The issue came to light when a council committee was asked to approve £183,000 worth of investment into the farmhouse, extend the tenant’s tenancy from five to 15 years, and offer a rent abatement until the works were completed.

The council ordered an internal inquiry, although Mr Hickford’s lawyers had argued over its early findings.

However, last week he announced he had left the farmhouse, quit as a councillor, resigned as deputy leader of the Conservative-controlled council and left the area.

John said: “The fall-out has been remarkable. A whistle-blower came forward with evidence and that helped, but for legal reasons we were unable to reveal all of it at the time. That will, of course, now change.

“Fundamentally it seemed to me something was not right and like a dog with a bone I stuck with it and refused to let go.”

John thanked Archant investigations editor Tom Bristow and to managing editor Tim Williams “for their support, encouragement, guidance and providing a shoulder to lean on”. during his investigation.

A previous investigation into the same council led to the authority acknowledging fraud within a council subsidised community transport group.

John said: “There are similarities. Both resulted in major internal inquiries, both audit reports came to around 450 pages, both resulted in legal challenges to the paper, and both ended up costing huge sums of public money to investigate. And in both instances, heads rolled.”

Mr Hickford did not respond to calls from the Times for a comment.