The Speaker of the House of Commons has been among those to congratulate his local newspaper as it marks 150 years in business.

The Chorley Guardian has celebrated its 150th anniversary with a special supplement looking back on the “people, places and things” that have made up its patch since 1871.

Among those to wish the Guardian well on its achievement was Commons Speaker Sir Lindsay Hoyle, who is MP for Chorley.

Sir Lindsay praised the paper for reaching the “important milestone”. 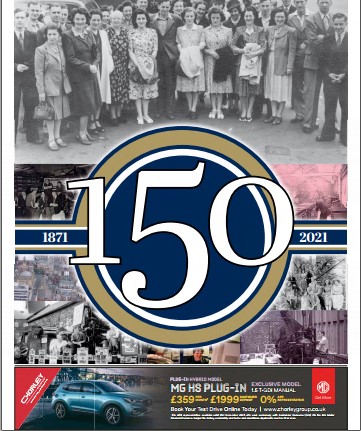 He told the Guardian: “150 years of providing local news is a major achievement. The paper has reported on local news and witnessed significant changes and historical events along the way.

“I still believe the need for a strong and trusted local paper is as important now as it was 150 years ago.”

The Guardian’s anniversary came during the Journalism Matters week, an annual campaign designed to highlight the importance of trusted news.

Sir Lindsay added: “With the growth of fake news, misleading and sometimes dangerous speculation which is purported as the truth, the need for independent and strong news sources such as our local newspapers is even more essential.”

As part of the anniversary coverage, the Guardian has compiled “150 reasons to be proud of Chorley”.

Editor Jane Clare told HTFP: “We could have been self-indulgent about ourselves as a newspaper/local media brand – but I wanted to mark it with 150 stories about people, places, and things.

“I very much wanted to pay tribute to the people, the place, that makes us what we are.”