Lyrics associated with a Christmas advert adorned a daily’s front page as it urged readers to help save an iconic store from closure.

Aberdeen daily the Press & Journal splashed yesterday on a campaign to save the city’s John Lewis store after the retailer it was one of eight branches set for closure.

To launch the ‘Save Our Shops’ campaign, the P&J splashed with a collage of images of its patch and the headline ‘Somewhere Only We Know’, taken from the title of Keane’s 2004 hit which was covered by Lily Allen for the 2013 John Lewis Christmas TV ad.

A front page editorial, warning of a “domino effect” on other Aberdeen retailers, also drew from the song’s lyrics. 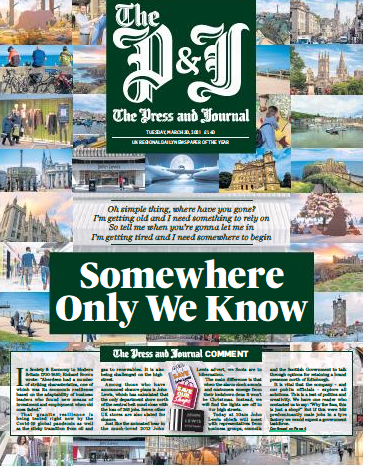 It states: “The P&J has received hundreds of letters and messages – many of which we have put online and in paper – while a petition has attracted more than 23,000 signatures.

“A special bond exists between John Lewis and its customers and as city centres evolve they will only thrive if quality experiences, shops and public facilities are at their heart.

“John Lewis should be part of that for the north of Scotland.”

Quoting the song, the editorial adds: “This could be the end of everything, so why don’t we go somewhere creative and think of a new solution that can work for the company and for its customers.”