Chief reporter steps up to edit weekly at age of 28 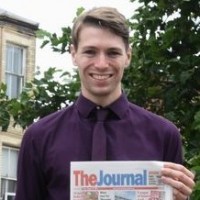 A chief reporter has been promoted to edit a weekly newspaper at the age of 28.

Reece Hanson has been appointed to take charge at the Lowestoft Journal, where he has worked since October 2018.

Their appointments follow a restructure of Archant’s operations in Norfolk and Suffolk, which has seen the titles’ previous editor Andrew Fitchett promoted to managing editor of the company’s Norfolk weekly titles.

Both Reece, pictured, and Anthony have been given the official title of community editor at their respective papers, but have been described as editors in stories announcing their appointments.

Said Reece: “I’m honoured to have been named community editor of a newspaper I have been so passionate about for the last three years.

“We are the only local newspaper in the town and we are fully aware of the responsibility that involves.

“In my first week at the Journal I was thrilled to be invited along to the Stars of Lowestoft and Waveney awards and from that night on I have been inspired by so many wonderful people who call this part of the world home.

“It is only right we play our part too, and we must be a champion for the UK’s most easterly town, and strive to make it a great place to live, work and visit. I can’t wait to get to work.”