Sister dailies have urged football supporters to recognise their power after a campaign by fans and the media led to the collapse of the European Super League less than two days after its launch.

HTFP reported yesterday how the Liverpool Echo and Manchester Evening News had along with other Reach plc titles had launched their ‘Our Clubs, Our Future’ campaign to halt the plan, with the backing of a number of fellow Reach plc titles.

As protests continued outside stadiums and online from supporters across Europe, the six English clubs involved in the league, to which they would have been guaranteed entry each year despite domestic league performance, all pulled out yesterday evening.

Among the casualties of the failed project was Manchester United executive vice-chairman Ed Woodward, one of the prime movers behind the proposal, who announced his resignation last night. 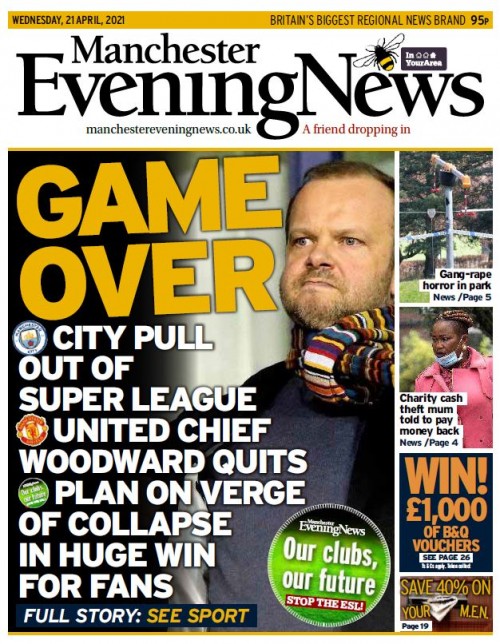 The MEN splashed on his departure, and the ESL’s collapse, this morning after an evening before filled with dramatic updates on the league’s demise.

Posting a link to the final front page on Twitter, editor Darren Thwaites wrote: “It seems we’re designing an updated edition every 10 minutes tonight – here’s the last one for the printers… surely.”

In an editorial urging Manchester United fans to see the last 48 hours as a “call to arms”, MEN senior football writer Tyrone Marshall wrote: “Whether it’s about making sure the final breaths of the ESL were extinguished, forcing a change of ownership at their club, getting fans a voice around the boardroom table or more day-to-day issues, such as ticketing and TV schedules, if one good thing can come from this greedy money grab it should be a mutiny amongst football fans.

“Football isn’t their game, it’s ours, it’s yours. This should be the moment that fans make sure they’re never treated like disposable commodities ever again.”

Tyrone’s sentiments were also shared by the Echo.  Its senior digital football journalist Theo Squires wrote: “Football is nothing without fans but it is impossible without players. Sure, they come and go but they wear the shirt with pride.

“For so long the saying has been: ‘It’s about the name on the front of the shirt, not the name on the back.’ But such monstrosities to our game are being carried out in the names of our clubs. And none of it is with the supporters in mind. Now the opposite is true.

“Every player and every manager represents every fan that has ever dreamed of running out for their beloved side. And the footballing world thanks you.

“Now they alone are the ones we can cheer and trust. Our journeys all started at square one and we have all been betrayed. And they are the ones who have made the difference in this football civil war.”