An award-winning investigative journalist and editor described as a “natural storyteller” has died aged 72.

Tributes have been paid to Steve Davies, who edited weekly titles the Southampton Advertiser and the Basingstoke Observer.

Steve, pictured, also served as investigations editor on the Southern Daily Echo and worked on Portsmouth daily The News during his career.

During his time at the helm of the Advertiser, he won accolades including Provincial Journalist of the Year at the 1992 British Press Awards. 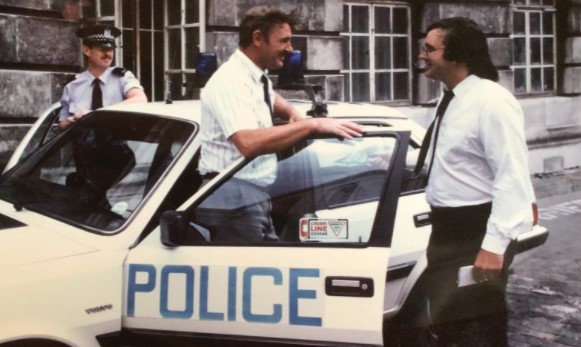 Steve Davies, right, at a photocall with police during his time at the Southampton Advertiser

Journalist Nick Dermody, who worked at the Advertiser at the time, said: “Steve believed in the power of the media to make a difference using good stories that were well told.

“One of his strengths was the way he wrote stories. If he announced it was a ‘great yarn’ you knew he had got to the bottom of the matter and was building it back up in a way which would be engaging, often funny, and to the point.

“He demonstrated how campaigns, if they were successful, often became a source of stories in themselves, so they would help to fill the paper – and some were great tales which we would not have had otherwise.

“He set high standards for himself and his body of work shows that he achieved them time after time.”

Steve was born in Newport, South Wales, and grew up in Burnley – retaining a lifelong association with the Lancashire town through his support of Burnley Football Club.

He worked at The News in the late 1970s and it was while running the newspaper’s Gosport office that he met his wife Carole, and he briefly left journalism to look after their first child before joining the Advertiser.

He ran a successful campaign called ‘Open the Empties’, which called on the local council to bring vacant properties back into use.

According to an obituary by his journalist son Gareth, Steve also “had a flair for elaborate and convincing April Fool’s stories”.

His most successful yarn was about plans to build a replica of the Statue of Liberty in the Solent.

The spoof included a four-page supplement, with advertisers and even Southampton Council in on the act, and was so convincing that it led to a free trip to New York, complimentary hotel accommodation and interviews with unsuspecting officials from the National Parks Service, who were convinced the plans were genuine.

The Advertiser’s editor Tony Curran, who Steve succeeded in 1989, was also on the trip.

Tony said: “Everyone at the paper, all the advertisers and even the council were in on it. The only people who weren’t were the readers and the poor guys in the US.

“We never let on that it wasn’t a spoof and they all fell for it. But we were a bit skint at the time. We had free accommodation in the New York Hilton but we had to smuggle in pizza and cans of beer because we couldn’t afford the hotel meals.

“Steve was a top notch reporter and a brilliant newshound – and we had some great fun too.”

After leaving the Advertiser for the Echo, Steve’s home was attacked and his family threatened while he investigated a gang of drug dealers.

Believing he could reason with them, he went to the shopping precinct where they operated only to be brutally assaulted, leading to his family being forced to flee the area after further attacks followed.

According to Gareth, an investigative journalist with the Bureau of Investigative Journalism, his father “never fully recovered from the psychological impact”.

Ric Sumner, who worked under Steve at the Observer, said: “Steve had an outsized personality and didn’t suffer fools gladly but without the time and energy he invested in helping me as a cub reporter I doubt I would have gone on to have half the career I have had.

“He was a natural storyteller and a gifted journalist who always knew exactly what angle to take to grab readers’ attention.

“Armed with an impish wit, he loved nothing more than poking fun at establishment figures, and prided himself on giving marginalised people a voice.”

Away from journalism, Steve featured in Keep Them Out, a Dispatches documentary which followed a campaign against plans to open an asylum centre in Lee-on-the-Solent, Hampshire.

He was one of the leaders of an opposition group, and by night he would secretly remove protest banners – many of which featured racist messaging – from the walls surrounding the naval air base where the centre was due to be opened.

His actions prompted local media – including his former paper The News – to dub him “Bannerman”.

One of five siblings, he was also a “proud Welshman” who loved sport, including rugby, boxing and golf.

Steve is survived by his two children, Gareth and Evan.

For details of his funeral or to contact his family please email garethdavies@tbij.com.