Woman tells reporter covering court case: ‘I’ll do you in’ 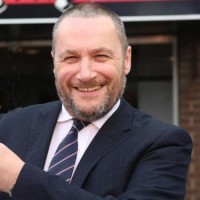 A woman appearing in court after assaulting two police officers issued violent threats to a reporter covering the case.

Rosaleen Sutherland launched a tirade from the dock at Greenock Telegraph journalist David Goodwin, telling him: “I’ll do you in.”

Addressing David in court, 50-year-old Sutherland said: “You say anything about my son again and I’ll do you in, ya scumbag, ya clown ye.”

Sutherland, who was herself the alleged victim of petrol bomb attacks at her home last year, had been remanded in custody at Greenock Sheriff Court after assaulting two police officers last month.

She pleaded guilty to assaulting the two officers on 14 September and was placed on an 18-month supervision order.

Telegraph editor Brian Hossack has condemned the abuse David faced in court.  He told HTFP: “It is completely unacceptable that anyone going about their job is subject to threats or abuse in this way.

“David handled the matter professionally and simply got on with doing his job of reporting what was happening in the court on the day.”

Following her outburst, Sutherland was removed from the dock on the order of Sheriff Joseph Hughes before being brought back up from the court cells after a lengthy adjournment.

She apologised through her lawyer Aidan Gallagher for her behaviour.

Mr Gallagher said: “She is apologetic. It follows from an article that appeared. Her house was allegedly previously subjected to targeted attacks.”

Sheriff Hughes told her: “It is not appropriate to verbally attack anyone, least of all in a court. Do not ever again engage in the kind of conduct you displayed in this court.

Earlier the court heard that Sutherland had told the two officers: “I’ll have you two murdered, and your families.”

“Lenny is getting out in two weeks and he’ll petrol bomb your houses, and yous will be getting slashed. My Lenny will cut the head right off you.”

Sutherland is due to face trial on separate charges of phoning police in May last year, threatening to commit suicide, shouting, swearing, acting aggressively, kicking a police officer and making threats to kill two PCs.

Cole appeared in court earlier this year charged with the attempted murder of Shaun Charles in Greenock on June 9 in 2018 and a second murder bid in Port Glasgow town centre on August 27 in 2019.