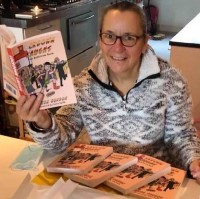 An accident-prone journalist landed his wife a book deal after a publisher discovered her off-the-wall musings about life with him.

Gerda Gordon, a former IT executive at Glasgow’s Sunday Mail, has had ‘Lockdown Laughs: The Bathroom Book’ published for charity after developing a following on social media.

The project began when Gerda, pictured, published what was supposed to be a one-off Facebook post at the start of the coronavirus lockdown about her husband Alex, who used to be the Mail’s sports editor, and his “extraordinary lack of skills with anything connected with technology”.

Further posts on similar lines followed and Ringwood Publishing boss Sandy Jamieson contacted the 56-year-old with a view to publishing a book based on the posts.

Discussing how the project had snowballed, Gerda said: “The stories became more and more absurd as I put together my daily take on life in a fictional neighbourhood.

“I began to invent characters – not based on anyone I know, I hasten to add – and Alex somehow was transformed into a character known as ‘The Dweeb’. I’m not too sure he was overly happy about that.”

She added: “When Sandy Jamieson got in touch we agreed it would be a great idea to publish the book with all profits going to charity.

“Sandy and his staff at Ringwood are giving their services completely free and we are attempting all sorts of ways to raise cash for four charities, Alzheimers Scotland, Cancer Research, Children In Need and Cystic Fibrosis Trust.

“The support from everyone has been quite awesome. These are hard times, but all sorts of folk from all sorts of walks of life have willingingly joined in to spread the word in an effort to help good causes.”

Alex, 68, worked in newspapers for almost thirty years and has had 22 books published himself.

He said: “I am so proud of Gerda. Not sure I like being dubbed ‘The Dweeb’, but I suppose I have been called worse.

“My missus really hadn’t an inkling what she was about to let herself in for when she put that first one together.

“Sadly, her observations that day about my inability to understand computers were actually factual.”