Women’s editor who was ‘synonymous’ with daily dies aged 89 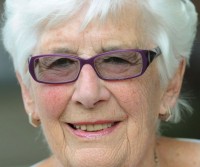 A women’s editor who was “synonymous” with the regional daily she worked for has died aged 89.

Tributes have been paid to Leicester Mercury journalist Joan Stephens, who continued to write for the newspaper even into her retirement.

Originally a French teacher, she also worked on BBC Radio Leicester before joining the Mercury in the late 1970s.

Joan, pictured, interviewed Margaret Thatcher and was also responsible for setting up many local events, ranging from the paper’s wedding fayre to an annual ploughing competition, during her career.

John Aldridge, who was the chairman and managing director of the Leicester Mercury from 1982 to 1997, told the paper: “Joan was an established writer when I joined the Leicester Mercury and she was very gifted with a wide knowledge and a was a go-to person in the office – very popular, very approachable and with a great sense of humour.

“She was almost synonymous with the Leicester Mercury – if you told people you worked at the Mercury they would tell you they knew Joan Stephens.

“She and the publicity manager created a whole plethora of events, including the annual fashion show, the wedding fayre and the ploughing match, which was hugely popular.

“The match absolutely captured the imagination of readers and tickets were in huge demand. It was a wonderful time when the paper was driving so many events in the area.

“She was also a very fair restaurant critic and wrote a lot about local food issues. If you went into a restaurant with her you felt the staff almost stand to attention.”

Alex Dawson, former Leicester Mercury features editor, added: “Joan was a huge help to me when I started at the Mercury in 1989 and a maternal figure for all the journalists.

“She was kind, quiet and fairly mumsy. She was the sort of person who, upon meeting her, you’d think probably enjoyed gardening and making jam – and of course she did all those things but so much more.

“There was an amazing breadth to her – she was a qualified pilot and a real groundbreaker and innovator. You gradually realised how much more there was to her.”

“She was very intelligent, very kind and an impressive all-rounder.”

Even after her retirement about 20 years ago she continued to write book reviews, restaurant reviews and other pieces for the paper.

Her daughter Emma Anderson said: “She started on the paper at a time when it was rare to have women in senior positions in news and she did her full-time job while also looking after the house and doing the cooking and everything – something that led to criticism from some quarters.

“She really loved the Mercury and really got a buzz out of it. She worked hard but you would never say she was scary or formidable – she just connected with everyone she met.

“She was inspirational and incredible – a really strong, enterprising woman but in such a gentle way.”

Joan died at her home in Burton Overy, Leicestershire, on Friday after five months battling cancer.

She and her husband Peter were married for 62 years and have three daughters, six grandchildren and two great-grandchildren.

Peter, 88, has been in hospital for the past two weeks with a broken hip and his family were only able to break the news of his wife’s death on Saturday.

The family hope to hold a memorial service for Joan after the coronavirus lockdown comes to an end so that her many friends can pay their respects.