A postman’s plea prompted a weekly newspaper to unite a mystery letter with its intended recipient.

An appeal by the Isle of Wight County Press successfully identified the location of Annie Harris, after postal worker Damian Howarth was left baffled by the address given by the letter’s writer.

The letter’s envelope included only the wording “staying with the Harris family on an estate on the Isle of Wight”.

County Press head of content Lori Little was alerted to the story on social media, and within hours of her piece being published on the paper’s website the intended recipient had been found. 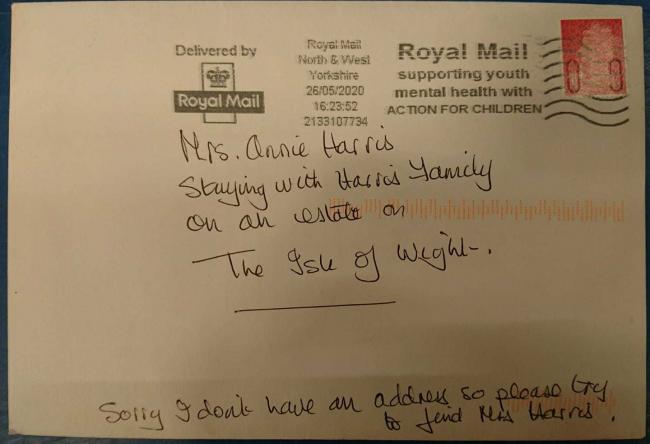 “I was alerted to the story when a friend tagged me in a community post on Facebook. I immediately saw the potential to help, as well as it being a good story, as not everyone is on Facebook and our website has huge reach across the Island.

“Within half an hour the story was up, and a couple of hours later I had a phonecall from the lady’s son.

“I put him in touch with the postman. Another person had come forward but this turned out not to be the right recipient, so the letter was quickly passed on to Mrs Annie Harris.

“Her son phoned me up to say thank you. It was a nice story to be involved with.”

Mrs Harris’s son Tony contacted the County Press after noticing a postmark from Yorkshire, where is 87-year-old mother is from, on the envelope.

He told the paper: “It was a nice little story and great to get the letter from Damian, the postman.

“It was just a run-of-the-mill letter, nothing particularly exciting, but good to have it despite the bizarre instructions on the envelope.”