A weekly newspaper has scored a “major” campaign victory after councillors rejected plans to build on a sports ground on its patch.

Basingstoke and Deane Borough Council’s development control committee voted down two planning applications to build on the Camrose Ground, which was the home of Basingstoke Town FC until last year.

HTFP reported last week how the Gazette had issued a front page warning, pictured below, to members of the committee prior to the vote, running the headline “History is watching”.

Ahead of the decisive meeting, the paper also wrote to all 12 councillors on the committee urging them to “make the right decision”. 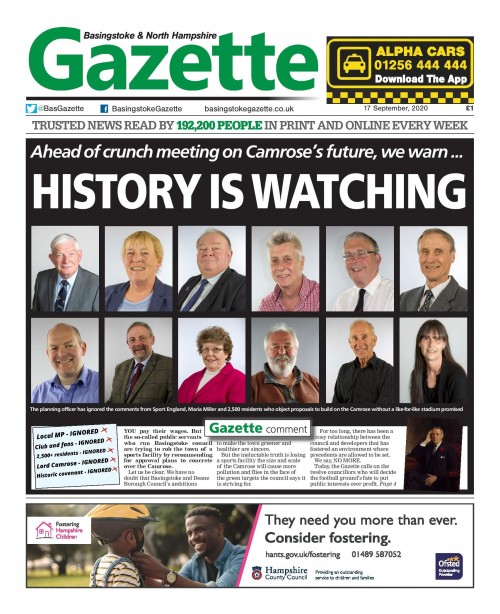 Editor Katie French told HTFP: “In a widely unexpected move, they sensationally voted against the council’s planning officers who recommended it for approval.

“This is a major victory for the community and for the Gazette’s campaign, urging councillors to listen to residents ahead of civic chiefs.

“Questions now will need to be asked about why the council’s planning team deemed it fit to recommend these proposals which were unanimously rejected.

“In a public consultation on building flats on this site, 66 out of 66 people opposed it. As one councillor put it, in football terms, that’s 66-nil.”

The Gazette has been campaigning to save the ground from development after uncovering a 67-year-old covenant which stated the site should remain a sports facility until 2053.

Speaking to HTFP on Thursday, Katie added: “While the legalities around this covenant are disputed by the landowner, we still firmly believe losing the Camrose to development is robbing the town not only of a sports facility but a site of cultural significance and historical importance.

“Ahead of last night’s meeting – probably the most tense I have ever watched – we wrote to each councillor individually and sent them a copy of last week’s paper which included a leader column on the football ground and a call to action.

“It was heartening to see last night councillors from all political parties had taken the public’s comments on board and had stuck up for the town by voting these proposals down.

“There was a real sense of joy and gratitude from the public who felt councillors were finally listening. Our live blog coverage was read by thousands of people and even the council meeting on YouTube attracted hundreds of comments.

“It is likely this application will go to appeal and we will be ready at every stage to continue our campaign.”