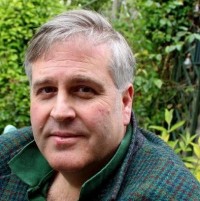 A weekly newspaper journalist has won international plaudits in a contest honouring a famous American poet.

Evesham Journal entertainments editor Gary Bills-Geddes has been named one of the runners-up for the 2020 Robert Frost Poetry Competition.

Gary, pictured, was the only UK poet in the final mix for the American-based competition, run by the Frost Foundation.

There were nine equal runners-up in the contest, with one overall winner.

Gary said: “It’s nice to be counted because Frost actually lived in the Dymock area for a while, close to Ledbury, where I live.”

He has also been told he has taken the prize-winning “highly commended slot” in the Charles Causley International Poetry Competition, with another of his poems also making the shortlist.

An organiser of the contest told him: “I am delighted to inform you that your poem ‘Thirteenth Note’ was highly commended in the 2019 Charles Causley International Poetry Competition.

“You will also be interested to learn that your poem entitled ‘Country Wedding’ was shortlisted but did not win a prize.

“In an extremely competitive field of 640 entries, it is quite an achievement to have two poems reach the final shortlist, so many congratulations on your success.”