A weekly newspaper has called for the resignation of an MP who travelled across the country by train after testing positive for coronavirus.

Margaret Ferrier’s local paper the Rutherglen Reformer has urged her to quit over the scandal in an open letter published on its front page.

Ms Ferrier has faced resignation calls after revealing she travelled to London and spoke in the House of Commons while awaiting the result of a coronavirus test, then returned by train from London to Scotland after testing positive.

She has been MP for Rutherglen and Hamilton West since 2019, and previously held the seat for the Scottish National Party between 2015 and 2017. 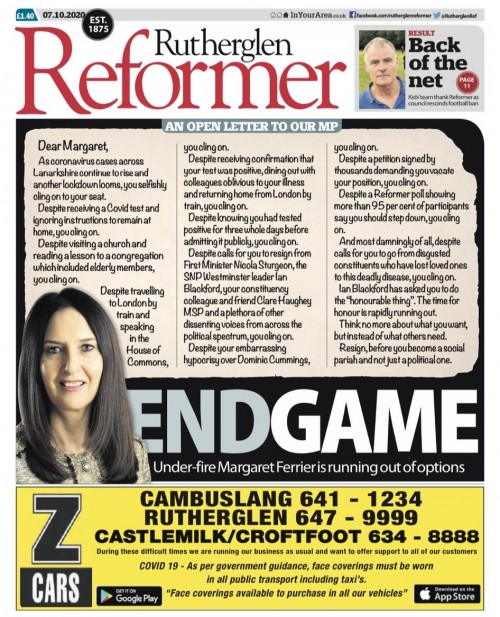 In a poll run by the Reformer, 95pc of readers said she should resign over the issue.

In its open letter, pictured above, the newspaper states: “As coronavirus cases across Lanarkshire continue to rise and another lockdown looms, you selfishly cling on to your seat. Despite receiving a Covid test and ignoring instructions to remain at home, you cling on.

“Despite visiting a church and reading a lesson to a congregation which included elderly members, you cling on. Despite travelling to London by train and speaking in the House of Commons, you cling on.

“Despite receiving confirmation that your test was positive, dining out with colleagues oblivious to your illness and returning home from London by train, you cling on. Despite knowing you had tested positive for three whole days before admitting it publicly, you cling on.

“Despite calls for you to resign from First Minister Nicola Sturgeon, the SNP Westminster leader Ian Blackford, your constituency colleague and friend MSP Clare Haughey and a plethora of other dissenting voices from across the political spectrum, you cling on. Despite your embarrassing hypocrisy over Dominic Cummings, you cling on.”

The Reformer went on to cite its own survey and a petition signed by thousands of people demanding she resign.

It added: “And most damningly of all, despite calls for you to go from disgusted constituents who have lost loved ones to this deadly disease, you cling on. [SNP Westminster leader] Ian Blackford has asked you to do the “honourable thing”. The time for honour is rapidly running out.

“Think no more about what you want, but instead of what others need. Resign, before you become a social pariah and not just a political one.”

Editor Graham Miller told HTFP he had beenn “overwhelmed” by the response the front page had received, both locally and nationally.

He said: “I was aiming to reflect the mood of the patch with the open letter to Margaret Ferrier.

“Her constituents feel terribly let down and that disappointment is now turning to anger as we approach almost a full week since her actions became public.

“The general feeling is that, by not resigning or at least indicating that she intends to, she is once again thinking only of herself.”