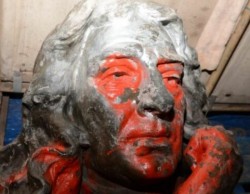 A regional daily editor has explained why his paper is refusing to publish police photographs of people wanted in connection with the toppling of a notorious statue earlier this month.

The statue of slaver Edward Colston, left, was pulled from its plinth and dumped into Bristol Harbour during a Black Lives Matter protest in the city.

Now Avon and Somerset police have launched an appeal to find those responsible for tearing down the statue, publishing pictures of 15 people wanted in connection with the incident on its website.

But Bristol Post editor Mike Norton has declined to re-publish the images saying most of his readers oppose the prosecution.

Mike explained his reasoning in an editorial published on Monday.

It follows a poll of 10,500 Post readers which found that 57pc did not believe tose who toppled the statue should face charges.

In his piece, Mike said the police investigation was “at odds with what the majority of Bristolians believe should happen.”

He wrote: “We think the majority of Bristolians accept that the years of frustration and offence at the statue’s existence mitigate what happened two weeks ago.

“That is why the Bristol Post or Bristol Live will not publishing the police photographs.

“We do not agree that the actions of those young people should be reduced to a simple act of criminal damage which ignores the complex context and history around it.”

The Avon and Somerset force had previously defended its decision to issue the appeal in a piece on its website.

Detective Superintendent Liz Hughes said: “The incident attracted worldwide attention and there’s no denying it has polarised public opinion – but in the eyes of the law a crime has been committed and we’re duty-bound to investigate this without fear or favour.”