The press watchdog has backed a regional daily’s reporting of police guidance on coronavirus lockdown restrictions following a reader complaint.

The Independent Press Standards Organisation has rejected a complaint by David Roberts about a story published on the Liverpool Echo’s website in April.

The story contained a video captioned “10 activities you can do during the coronavirus lockdown” and stated that this was according to police guidance.

The activities listed as permitted included: driving to the countryside for a walk, exercising more than once a day where this was a reasonable excuse for leaving home, stopping to rest for short periods whilst walking and buying alcohol and luxury items. 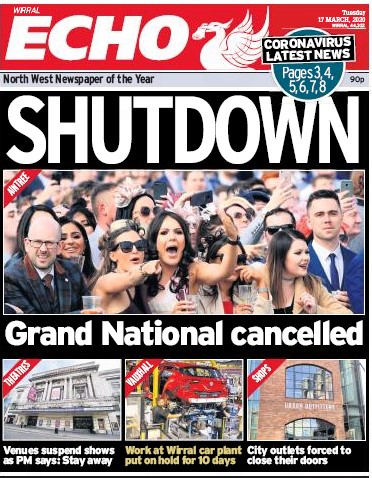 How the Echo covered the initial lockdown announcement in March

Complaining under Clause 1 (Accuracy) of the Editors’ Code of Practice, Mr Roberts expressed concern the video could encourage irresponsible behaviour and claimed it was inaccurate because the examples it gave contradicted the government’s guidelines.

For example, he said that the government’s restrictions required people to only buy necessities, exercise only once a day and only travel when strictly necessary.

The Echo denied a breach of Code and stated it had relied on guidelines from the National Police Chief’s Council and College of Policing, which was made clear in the video.

IPSO found the video had made clear that the activities it reported people could do during lockdown, which the complainant disputed as being permitted at the time of publication, came from “guidance to police”.

The Echo had provided a copy of the guidance it had relied upon, and where this had been accurately reported, there was no breach of Clause 1.