Union chiefs have demanded greater protection for local newspapers and more government advertising in the hyperlocal sector as part of their plan to reinvigorate the industry both during and after the coronavirus pandemic.

The National Union of Journalists has announced its “news recovery plan”, which sets out a number of both short and medium-term measures it wants to be implemented in order to help the industry.

The union is calling for strategic investment in government advertising, including the hyperlocal sector, involving central and local governments and public bodies as part of the short-term measures it wants to see introduced.

The NUJ also wants to see “asset of community value” status conferred on local newspapers – like community pubs – ensuring that titles are preserved for potential community ownership if they face closure.

The calls come after the government this morning launched a new three-month public information advertising campaign in both the regional and national press.

Proposed short-term measures outlined by the union include:

– A windfall tax of 6 per cent on the tech giants, using the Digital Services Tax, towards funding a News Recovery Plan.
– Tax credits and interest free loans to support journalist jobs, for frontline reporters covering the COVID-19 crisis and recovery.
– No public money for firms making redundancies, cutting pay, giving executive bonuses or blocking trade union organisation.
– Strategic investment in government advertising, including the hyperlocal sector, involving central and local governments and public bodies.
– Further funding by NESTA’s Future News Fund of innovative, public interest journalism and a similar scheme in Ireland
– Free vouchers for online or print subscriptions to all 18-and-19-year olds and tax credits for households with subscriptions.

The medium-term measures include:

– Establishment of a government-funded Journalism Foundation – as recommended in the UK’s Cairncross Review – to invest in local news and innovative journalistic projects.
– Confer “asset of community value” status on local newspapers – like community pubs – ensuring that titles are preserved for potential community ownership.
– Tax breaks, rate relief and other financial support for local social enterprises and journalistic cooperatives taking over titles from major regional operators, running them as not-for-profit enterprises.
– Employee representation of 25pc on executive boards in receipt of public funding.
– Independent sustainable funding of public service broadcasting that protects its universality and prevents government interference.
– Nationwide media literacy strategy to tackle disinformation and fake news.
– Reform of media ownership rules, with a strengthened public interest test.
– Training that opens up access to journalism, including apprentices for school-leavers.
– Protection for whistleblowers and monitoring the potential impact of surveillance technologies being considered in response to COVID-19 challenge and easing of lockdowns.
– Support for a global framework to protect and promote journalism and improve press freedom.

NUJ general secretary Michelle Stanistreet, pictured, said: “This is not and cannot be about the preservation of the status quo. The emergency intervention needed now can only be the first steps towards a news reimagined.

“We need a triage plan of intervention and investment. That will involve action to stem the immediate damage being wrought, and longer-term measures to heal historic wounds.

“Our aim is to create a healthy diverse press, focussed squarely on the public good, one that can be sustained now and into the future.

“That’s why we want governmental commitments to a range of actions – some immediate and some when the worst of this crisis is over – that will create a news industry firmly rooted in the public interest journalism which will deepen public engagement in our democratic structures.”

Newsquest has launched an online food ordering service to help restaurants and cafes closed due to the pandemic.

The Eat Direct service builds a web-enabled e-commerce menu tailored to the business to showcase meals and prices, and customers will be able to place orders via a smartphone app.

Morgan Stevenson, Newsquest digital transformation director, said: “We’re all in this together. People isolated at home need to eat and drink – the best thing we can all do at this time is to support local restaurants and bars. Eat Direct lets the maximum revenue go directly to our local providers by avoiding hefty commissions.

“We’re there with you so sign up and we promise that within 24 hours we’ll be working on your web presence and apps so after just a few days you are back in the game.”

Bullivant Media titles is running pictures of children’s rainobw drawings in double page spreads across its portfolio over the coming weeks.

The pictures in supprot of the the NHS will appear in titles including the Coventry Observer, Solihull Observer, Redditch Standard and Leamington Observer.

More than 500 pictures have already been submitted to the company. 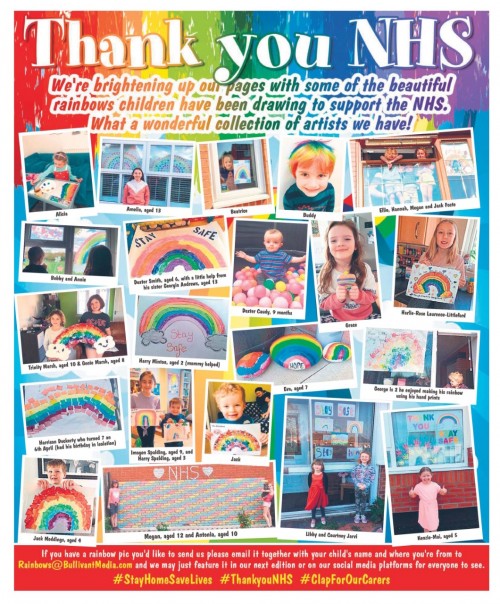 Claire Bullivant, from Bullivant Media, told HTFP: “We’ve also been approached by a company who would like to sponsor one of next week’s pages.

“So touching to see so many children putting in the effort and supporting our brilliant NHS.”

An Archant employee is using her own 3D printer to help protect NHS staff on the frontline.

Vicky Moore, who works as a commercial manager in Archant’s content marketing agency Dialogue, is manufacturing face shields with a team of five other people.

She said: “It’s great to be able to feel like we’re doing something practical to help. The machine runs 24/7 and requires a restart at 3am.

“Then, we’ve been making the shields up in the evenings after work before they are collected, cleaned and sent straight to where they’re needed.”

“This makes having the 3D printer running constantly behind me when I’m doing my day job totally worth it.

“I bought it for my husband’s birthday as he’s a gadget nerd but never expected it to be used in this way.”