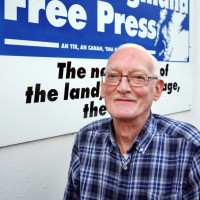 The UK’s longest-serving editor is among those to have been honoured at the 41st Scottish Press Awards.

Ian McCormack, who edited the West Highland Free Press for 44 years before retiring in January, has been unveiled as the winner of the annual prizegiving’s Lifetime Achievement honour.

There were also wins for the Dundee Courier, which won Digital Team of the Year for its ‘Shaped by a River: Tales of the Tay’ special series, and The Scotsman’s Gina Davidson, who won the Nicola Barry Award in honour of campaigning journalism by women.

Other regional winners included the Fife Free Press, which was named Weekly Newspaper of the Year and the Lennox Herald, which won Local/Weekly Campaign of the Year.

“Without the steady source of trusted information our journalists provide, little of this would be possible.

“Be it on mobile, laptop, desktop or print, our titles reach more people than ever before, and much more quickly; the role Scottish journalists play was vital before, is vital now in the midst of the greatest crisis anyone has ever experienced, and will be even more vital in the recovery to come.”

The awards ceremony itself, which was due to take place today, was postponed last month due to the COVID-19 outbreak.

Paying tribute to Ian, John added: “44 years as editor of a single title is a truly remarkable achievement and one unlikely to be repeated any time soon.

“Under Ian, the West Highland Free Press remained defiantly independent and true to its radical roots, providing a distinctive voice for the people of Skye and beyond. We wish him a very long and happy retirement.”

Arts/Entertainment Journalist of the Year
Barry Didcock, The Herald/Herald on Sunday

Columnist of the Year
Melanie Reid, The Times

Sports Columnist of the Year
Michael Grant, The Times

Financial/Business Journalist of the Year
Greig Cameron, The Times

Local/Weekly Feature Writer of the Year
Jack Haugh, The Gazette

Podcast of the Year
Gianni Marini, Democracy on your Doorstep

Scoop of the Year
Thomas Brown, The Scottish Sun

Front Page of the Year
The Scottish Sun

Journalism Team of the Year
Scottish Mail on Sunday

Journalist of the Year
Norman Silvester

Newspaper of the Year
The Mail on Sunday