Journalists have begun a two-day strike after confirmation that three editorial jobs have been lost at the weekly newspapers where they work.

Members of the National Union of Journalists at Bullivant Media are undertaking the first of two 48-hour walkouts throughout today and Wednesday.

The start of the action comes after it was confirmed two staff at the group have taken voluntary redundancy, with a further compulsory redundancy also being made.

Five journalism jobs had initially been under threat at the company, but this number has been reduced following negotiations with the NUJ. 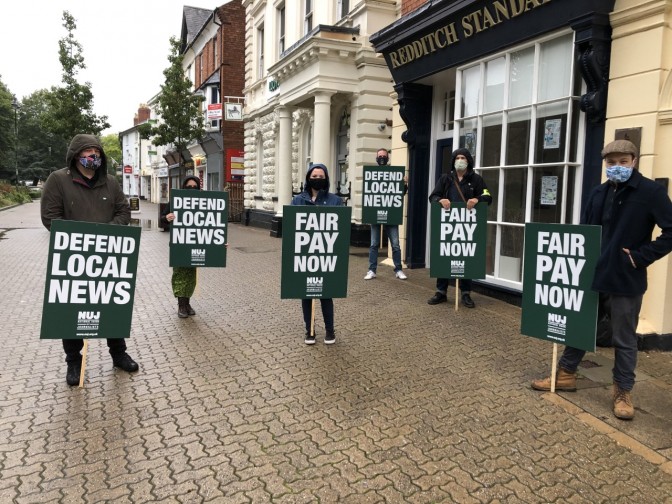 Striking journalists outside the office of the Redditch Standard this morning

A second strike is due to be held from Tuesday 1 September until Wednesday 2 September, but the NUJ has urged Bullivant to “respond to our reasonable demands for fair pay and decent working practices”.

In a statement, the chapel said: “We believe the redundancy proposals have been used as an attempt to derail the strike and demoralise the chapel – it is further alleged the company are targeting the active and leading members of our union.

“All we are asking for is that journalists are paid what they are owed in future, and staff should be properly consulted on the restructuring proposals.

“We also want the company to agree to avoid compulsory redundancies.

“We are asking everyone who cares about local quality journalism to support our strike and help us to convince the company they need to change their approach.”

Bullivant Media declined to comment when approached by HTFP.