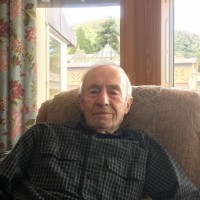 A sub-editor who also served as a weekly newspaper’s general manager has died aged 92.

Bryan Lloyd worked his way up from apprentice compositor at a printing firm to become general manager of the Witney Gazette.

He later moved into editorial after the Gazette was bought by the Oxford Mail & Times.

Bryan, pictured, worked as a sub in both news and sport for the Times before retiring at 65.

He had begun his career as an apprentice compositor at Usher’s printing works, in Witney, and later took on the role of intertype operator at the Witney Gazette offices in Marlborough Lane.

At the time, the paper consisted of only four pages and sold about 300 copies and Bryan produced and delivered the paper with the aid of one other colleague.

During his subbing career he was based in Oxford, where he retired on his 65th birthday.

Just one year later, Mr Lloyd returned to the Oxford Times as a part-time sports sub editor for about 19 months.

Bryan died at a residential care home for people with dementia, in Malvern, Worcestershire, in January.

He is survived by Mrs Lloyd, 86, and they had two children, Ian and Karen.