Daily teams up with mayor to raise cash for vulnerable

The Manchester Evening News has teamed up with Greater Manchester mayor Andy Burnham to raise funds for its patch’s most vulnerable people during the coronavirus pandemic.

The MEN has launched the COVAID-19 fund with Mr Burnham, splashing on the announcement this morning.

The fund will be administered via the mayor of Greater Manchester’s charity, which usually focuses on helping the homelesss of the region.

Cash will be used to help existing charities and voluntary organisations buy food parcels, toiletries, other basics, care and specialist support – emotional, financial or even with IT – for those who most need it. 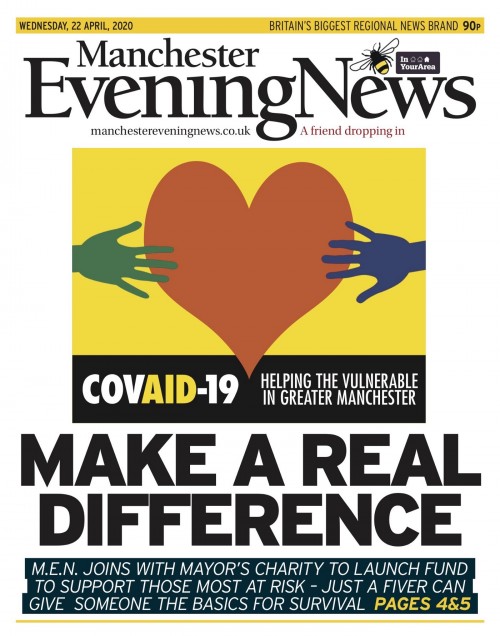 Mr Burnham said: “My sincere thanks to the Manchester Evening News for backing the mayor’s charity at such a critical moment for Greater Manchester.

“This time is tough for everyone but particularly for the most vulnerable in our community.”

Darren Thwaites, editor-in-chief of the MEN, said: “Most people have suffered in some way through this terrible crisis but the impact on our most vulnerable has been harrowing.

“We’ve always been a city that stands together to help people less fortunate in their time of need. This is one such time and we know people will do all they can to help.”

The fund’s launch comes after a special investigation by MEN reporters Charlotte Cox and Sophie Halle-Richards revealed the scale of the crisis facing care homes due to the outbrak.

The probe revealed care home staff’s fears regarding a lack of testing, that residents were being refused treatment and that GPs are issuing Do Not Resuscitate orders to them without consulting their families.

Newsquest has announced the launch of a home delivery scheme in line with a move which has seen paywalls established on the websites of all of its regional daily titles.

The company will deliver newspapers for free over the next six weeks under the scheme, entitled ‘We’re There With You — Please Be There With Us’.

The home delivery scheme applies to all paid-for Newsquest titles and is being launched in conjunction with a move towards part-paywalls on some of its bigger websites.

HTFP reported on Monday how the company had introduced a digital subscription scheme inviting readers to sign up to a subscription of either £4.99 per month or £52 per year.

Readers will be required to register after reading 20 articles in a month and will be asked to subscribe after reading 40, although coronavirus-related news will not be included in the tally.

University of South Wales journalism student Dan Moffat has appeared on Radio 5 Live’s Scott Mills and Chris Stark show to praise his lecturers in response to an appeal for people to recognise those who had helped them during the current lockdown.

Dan highlighted the work of journalism lecturers Craig Hooper, Rob Campbell and Beccy Leach since the university had closed due to government restrictions.

Dan told 5 Live: “The journalism course is very practical, so they’ve had to sort everything out.

“We have a few essays to write, and in the grand scheme of things we still have work to do.

“They’ve been available every minute of every day for email advice and stuff like that. They’ve been really good.”

In response, Beccy said: “We knew they were a great bunch so it’s come as no surprise to us.

“They’re clearly going through a lot of uncertainty and some of them have difficult experiences at home with illness, job losses, and educating their own children while doing their university work. It’s a challenging time for everyone.

“The mention on 5 Live was a lovely surprise – we just did the best we could to help them and to be there for them.”