A deputy editor who raised thousands of pounds to save a Sri Lankan dog injured in a machete attack has rehomed the animal after driving to Germany to collect her.

HTFP reported in September how Laura Kearns, of the Leamington Observer, was aiming to raise £1,000 to rescue the dog, a Sinhalese Hound, after lending her support to the Asian country’s dog rescue charities following previous holidays there.

Laura and her partner James Pedley were quoted around £1,000 to fly the dog to the UK, but final costs tipped more than £2,000.

Laura and two friends undertook a 10-hour drive to Frankfurt to pick up the dog after discovering it would cost a quarter of the price, and would mean the animal spending half the amount of time on an aeroplane, if she was flown to Germany instead of England. 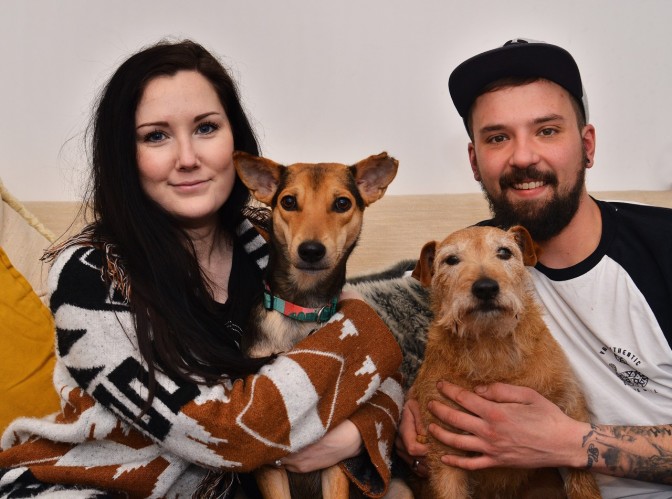 The one-year-old dog has been named Kandy, after the city in which she lived.

Laura, 30, said: “Kandy has settled in so well, it’s like she has always been here. We have taken things really easy, constantly bearing in mind that everything is new to her.

“Most things we were prepared for – the change in weather for her and that the home she lived in before probably was not like ours – but some things have been a surprise.

“She had never seen a tv, had never been upstairs before – now we can’t stop her – and she still jumps every time she sees herself in the mirror.

“All the stress of getting her here has been worth it, she is an amazing little dog and despite being attacked she loves people so much. Thank you to everyone who helped get us here.”

Lauran and James raised £1,700 through a fundraising page and a fun day, with family and friends helping to run stalls and bake cakes and local businesses among those to donate prizes to a raffle.

During this time the dog was moved to a sanctuary called Tikiri Trust, in Kandy, where she had to wait for three months after having a rabies jab and other vaccinations before she was able to fly.

Laura said: “After visiting Sri Lanka we knew this dog would not survive if she was put onto the streets.

“She had been owned before so had no road sense, and we had been told she was very friendly so knew she would follow the wrong person and the same thing would happen again or worse.

“When it was clear there was no alternative we set the wheels in motion to bring her to the UK – although we did not take lightly the idea of flying her such a long way.”

James, 29, added: “It was amazing how supportive everyone was, we could not have done it without their help. From our family, friends and colleagues to people we had never met, people went above and beyond to help us save this little dog’s life.

“Kandy was looked after so well at the sanctuary, which is home to around 200 other dogs, some who live there and some who are waiting to be flown to new homes in Europe.

“It is run by an incredible woman who opened it using inheritance left by her father and now her life is caring for the animals there.”