Three rival dailies have taken a joint stand for press freedom after recent threats were issued to their journalists.

The News Letter, Belfast Telegraph and Irish News have joined with other regional newspapers in Northern Ireland, as well as industry figures, in publicly condemning violence threatened against their reporters.

Detectives in Northern Ireland have opened investigations into threats against journalist at the News and Sunday Life, the Bel Tel’s sister title, in recent weeks.

A joint statement, pictured below, has appeared in all three titles today under the banner “Stand Up for Journalism”, which strongly asserts the right of journalists to work without threats, intimidation or harassment. 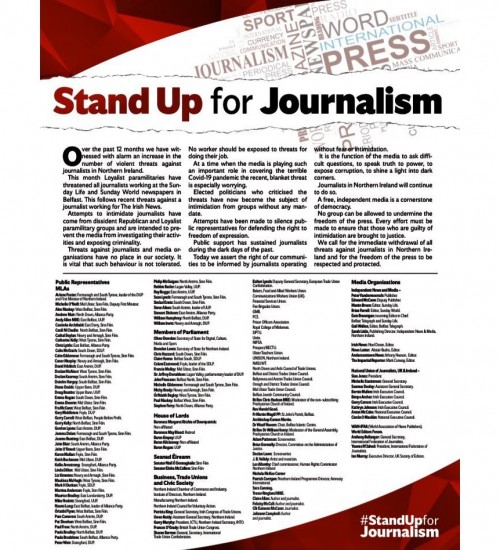 The statement’s signatories include the first minister Arlene Foster, the deputy first minster Michelle O’Neill and the majority of MLAs from the Northern Ireland Assembly.

UK government ministers Oliver Dowden and Brandon Lewis have both signed the statement, along with the Northern Ireland Chamber of Commerce and Industry, the Institute of Directors, the NI Council for Voluntary Action, UK Trade Union Congress and the Irish Congress of Trade Unions.

Noel Doran, Irish News editor, said: “The increase in the number of serious threats against Belfast-based journalists is a deeply alarming development, so the significant level of support behind today’s initiative is heartening.

“It sends out a strong message that all the attempts at intimidation will have no effect on our coverage, that the perpetrators need to be robustly pursued by the authorities and that civil society is firmly behind freedom of the press.”

Martin Breen, Sunday Life editor, said: “Enough is enough. Some 26 years after the ceasefires terrorist organisations from both the loyalist and republican side are continuing to threaten journalists on an ongoing basis because we have been exposing their dirty deeds and criminal empires.

“We all have to stand up against these vile threats as their sole aim is to silence investigative journalism and curtail the public’s right to know about those gangsters operating in their communities across Northern Ireland.
“We hold everyone to account and will continue to expose criminality and all wrongdoing no matter where it originates.”

Séamus Dooley, NUJ assistant general secretary, said: “In the past the trade union movement took to the streets in protest against the threats to workers.

“In the difficult circumstances in which we find ourselves today, we rely on newspapers to highlight the threats to journalists. By working with the publishers and our members affected, we have been able to secure the support of a cross-section of society in Northern Ireland.

“We warmly welcome the strong stand taken by political and community leaders and look forward to a renewed drive to ensure journalists can safely carry out their work on behalf of the public.”